Ancient treasures on show in Germany reveal turbulent past 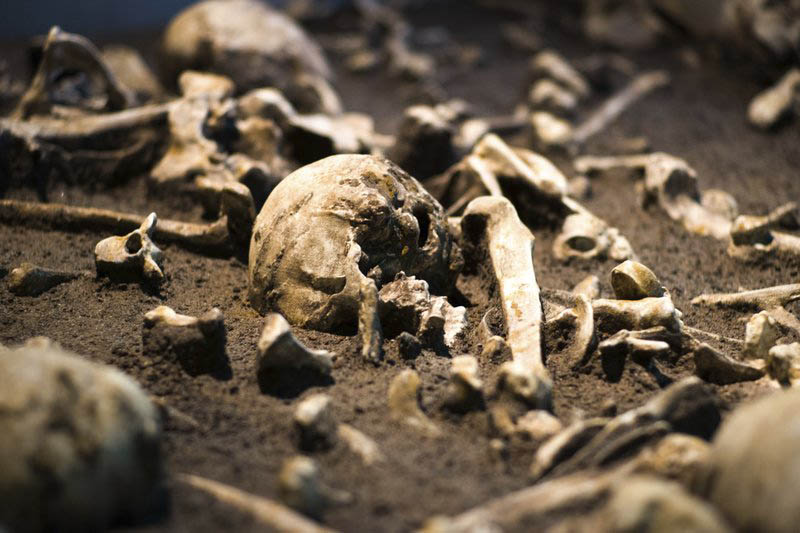 The Sept. 20, 2018 photo shows human skulls and bones of the battle of Tollensetal about 1250 BC. displayed at an archeological exhibition at the Martin-Gropius-Bau museum in Berlin. Photo: AP
BERLIN: An arrowhead firmly lodged in the skull of an ancient fallen warrior, a voluptuous woman’s form carved from ivory and the mask of a Roman river god are among more than 1,000 major archaeological discoveries being brought together for the first time. The exhibition opening Friday at Berlin’s Gropius Bau museum reveals how war, art and migration have left their mark in Germany since the Stone Age. The show spans more than 300,000 years, starting with a sleek wooden spear used by one of the pre-human species that once roamed the continent long before homo sapiens arrived. Neanderthal hand axes show how our ancient cousins fled the approaching ice age southward — the first tangible evidence of climate refugees — while the ivory “Venus of Hohle Fels” and similar etchings on slate dated to between 40,000 and 35,000 B.C. attest to early Europeans’ fascination with the female form, pursued by artists ever since. “The basis of Europe’s common cultural heritage can be found going back thousands of years,” said Christina Haak, deputy head of the Berlin State Museums that helped bring the objects together from museums across Germany. Often, the exact nature of the objects is unclear: The Nebra sky disk, a plate-size object of gold and bronze, depicting the sun, moon phases and the Pleiades star cluster, is considered one of the first astronomical depictions in history but may also have had religious significance. Dated to around 1600 B.C., the disk is only a few hundred years older than three spectacular hats made from sheet gold first believed to have been worn by early Celtic priests, but which may also have served as primitive calendars. Many of the artifacts in the exhibition, which runs until Jan. 6, show how strongly progress was linked to the movement of people, goods and ideas into and across Europe. “Migration is not the mother of all problems. It is the beginning of all innovation,” said Matthias Wemhoff, director of Berlin’s Museum of Prehistory and Early History. Wemhoff cited the wealth of objects found during the recent construction of a new subway line in Cologne, where artifacts from all over the Roman Empire prove the city was an early melting pot of cultures. Alongside the river god’s stony face was the perfectly preserved gravestone of a trader by the name of Sextus Haparonius Iustinus, who sold cosmetics and perfumes long before the city became known for its Eau de Cologne. Germanic smiths copied Roman helmets and later designed their own weaponry, including the Ulfberht swords that became prized by warriors throughout Europe in the Middle Ages. Fashions came and went, including the habit of binding babies’ skulls so they grew conical heads — a practice documented in what is now Bavaria and the Crimean Peninsula around A.D. 500. Likewise, the search for elusive formulas for turning mundane materials into gold, represented by the remains of an alchemist’s workshop from the 16th century, hasn’t survived, though the thirst for knowledge and profit lives on in Germany’s high-tech industries. Some of the objects on display, all of which were found in the past two decades in what is now Germany, are still shrouded in mystery. The skull with the arrowhead is part of a massive trove of bones and weapons that archaeologists believe could be the earliest known remains from a large-scale battle in human history. While another ancient military confrontation — the Battle of Kadesh in 1274 B.C. that pitted the Egyptian and Hittite armies against each other in what is now Syria — has been well documented, no physical evidence of it has yet been found. About 3,000 miles (4,800 kilometers) away in the Tollense valley on the frigid plains of northern Germany, thousands of Bronze Age warriors were also going to battle at almost the same time. So far, nobody knows why, or who they were.
#Germany
Stay in touch!