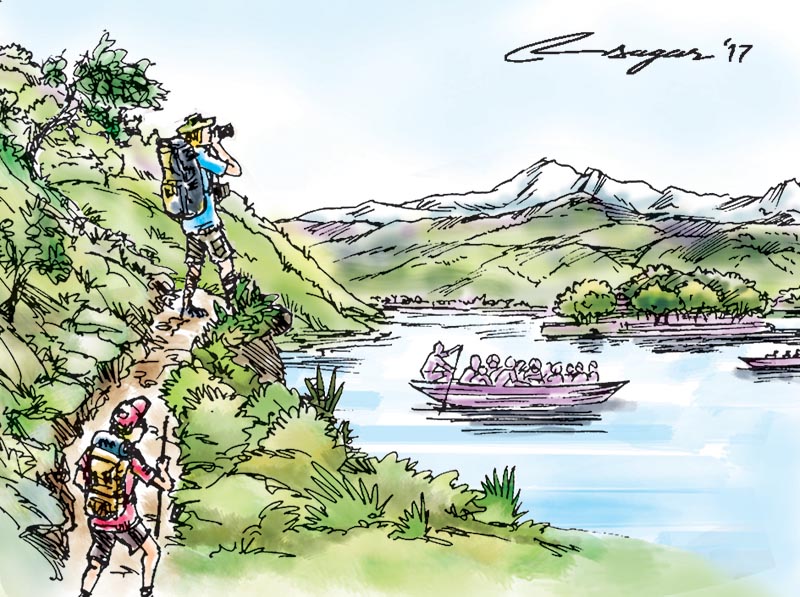 Illustration: Ratna Sagar Shrestha/THT
Tourism refers to the movement or journey of human beings from one place to another, whether it is within one’s own country or other countries. It can be for pleasure, business, pilgrimage and other purposes. Today, it is not just a word, but has become an industry, a medium for the livelihood of people. It has been viewed as a promising vehicle for economic development and poverty reduction, unlocking opportunities for local economic diversification in poor and marginalized rural areas that lack other significant development opportunities. The growing debate on the potential and pitfalls of this industry has resulted in the search for better approaches to environmentally sensitive tourism. Since the advent of the concept of sustainable development, attempts have been made to link it with virtually every aspect of development. Despite having a long history, the evolution of tourism in Nepal dates back to the 1950s. Since Nepal opened its doors to tourism in the early 1950s and Hillary and Tenzing first climbed Mt. Everest in 1953, visitors have been mesmerized by the magic of Nepal’s kaleidoscopic natural scenery and the cultural mosaic of its people and history. Regarding the modern concept, tourism is a relatively recent phenomenon in Nepal. However, GoN has placed tourism on high priority in its new tourism policy declared in 2009 to maintain it with national development. The Ministry of Culture, Tourism and Civil Aviation and the Nepal Tourism Board is responsible for promoting tourism. Nepal has been listed as one of the best places to be visited this year by National Geography. The highest and most beautiful snow peaks, particularly Mt. Everest, Annapurna, Nilgiri and the deepest gorge of Kali Gandaki, numerous impressive waterfalls and glaciers, the stunning trans-Himalayan zone of the Upper Mustang and the highest glacial lake of Tilicho contribute to this. Similarly, it is greatly diverse in terms of both cultural and biological features. It is diverse climatic condition which supports over 3430 species of flora, 393 species of flowering plants, 38 species of orchids, 9 species of rhododendrons, 102 species of mammals, 488 species of birds, 40 species of reptiles and 23 species of amphibians. It encompasses rare and beautiful bird species of the world including Himalayan pheasants, Rosefinch, Peacock, Spiny Babbler, etc. For a relatively small country, Nepal has some of the greatest diversities in topography, climate and biodiversity in the world. Ranging from tropical lowlands where one-horned rhinos, Asian elephants, tigers and gharials call home to the vast Himalaya and the roof of the world Mount Everest. Amongst the Himalaya an equal amount of biodiversity can be found as in the tropical lowlands. It has deep and dense forests of different trees including Chilaune, Katus, Mahuwa, Jamun, Kafal, Uttis. Also, it harbours various important Non Timber Forest Products (NTFPs) and provides a good habitat for highly valuable Himalayan NTFPs. Various areas in Nepal have seen a drastic change in the last few years thanks to the promotion of tourism. The areas have become successful in attracting a huge number of tourists, both domestic and international. The prosperity earned is not only monetary but also in the form of natural resources conservation. For instance, let’s take an example of Ghandruk. Ghandruk was an obscure village back in 1986, but now, thanks to an increasing number of tourists, it has become famous among tourists both domestic and international. As per the locals, prior to Annapurna Conservation Area Project (a leading tourism promoting program of National Trust for Nature Conservation), the hotel business was considered as a low class job but today almost all the houses are directly serving tourists via homestays, museums, lodges, hotels, shops, bakeries, etc. It has become a major source of income and thanks to tourism the economic status of people has drastically improved. The benefits of tourism far outweigh the problems but there are some consequences like unmanaged wastes within the Sagarmatha National Park, deforestation within the national parks, poaching, cultural transmission, buffer zone issues, etc.  The problems might be either due to unequal distribution of tourists or due to unmanaged utilization of the resources. This unbalanced distribution of tourists has created a myriad of environmental, social and other disasters within these areas while overshadowing many other potential areas. Similarly, a new challenge in the tourism sector is the construction of new roads in various spots including various inaccessible areas affecting mainly trekking tourism. However, if managed well, roads, a symbol of prosperity, can lead to higher farm and non-farm productivity, employment and income opportunities and availability of wage goods, thereby reducing poverty by raising income and consumption. Earlier, tourism was a part of need but today it has become a desire and an important source of income in many counties, including Nepal. Today, tourism industry is rapidly growing worldwide and its role is significant in the socio-economic sector of all countries. However, we cannot deny various negative impacts of this on our natural resources, which have been further exaggerated by the impacts of climate change. Thus, to promote tourism sector and its contribution to socio-economic sector of the country, we need to utilize available resources properly and beneficially along with community involvement.
#Nepal Tourism Board #tourism #Ministry of Culture Tourism and Civil Aviation #human beings #Mt Everest #Non-Timber Forest Products #Community development #NTFPs #socio-economic sector #community involvement
You May Also like: