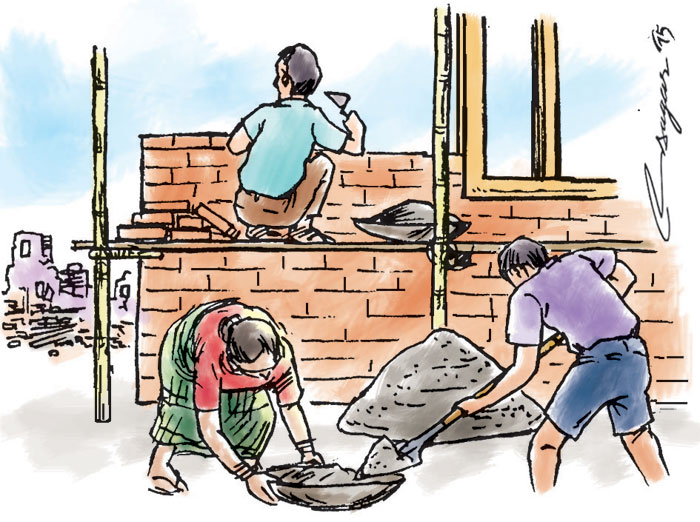 Rehabilitation and resettlement of earthquake victims are the biggest challenges facing Nepal in the aftermath of the 7.8 Richter scale magnitude earthquake that rattled the country. In some of the hardest-hit districts of Nepal like Gorkha, Sindhupalchowk, Dolakha, Rasuwa and Nuwakot, the poor and especially the disadvantaged communities have been gravely affected. The victims have been living in harshest of conditions post-earthquake. Because of difficult terrain, some quake-affected villages of these districts have not been easily accessible. For example, Barpark in Gorkha, an epicenter of the April 25 earthquake, is intensely remote. And there are places in Rasuwa and Dhading that have been hugely devastated and are very remote. What is urgent at this hour is the revival of livelihood post-earthquake through rehabilitation and resettlement. The in situ rehabilitation will mostly revolve around strengthening their conventional livelihood practices as well as diversifying their livelihood options. Compared to in situ rehabilitation, the more challenging task will be resettlement in new areas.

The new settlements will look like an agglomeration if they are not properly linked with formal or informal institutions. The consequence of this earthquake is also the loss of the century-old social capital and institutional linkages

The huge number of human casualties in this earthquake can be attributed mainly to existing human habitation. For instance, people have been living along the difficult terrains that are susceptible to landslides in many mountain districts of Nepal. Had they been living in better localities, many human casualties could have been minimized. Moreover, the poor rural livelihoods are more scattered in remote districts of the country. While development practitioners and policy makers have proactively discussed resettlement issues in the past, it now looks imperative that resettlement be given due priority for the betterment of the poor rural livelihoods. Resettlement is important from the perspective of inclusive development. In order to improve the living conditions of the poor and marginalized groups, especially the quake victims, resettlement in socio-economically appropriate locality is very crucial. But there are various consequences of all resettlement programs. The resettled communities may suffer from emotional loss due to attachment with their ancestral localities. So a psychological distress may occur as a result of resettlement programs. The resettled communities will lose their social network. Moreover, there will be a loss or change in occupations and livelihood strategies of the resettled communities. There is also a danger of increased dependency on food-aid programs which can be detrimental to the development and restructuring of the nation post-earthquake. Nonetheless, resettlement should be top priority of the government. But if resettlement happens without proper planning, various issues may come up in the near future. One is deforestation that may have a devastating effect on socio-ecological balance of the region. The other one is increased unemployment that may culminate in crimes. This will result in social unrest and loss of harmonious environment. So, while pursuing resettlement programs post-earthquake, we must come up with a clear plan. In other words, what must be the strategies for reviving livelihoods? The government along with development agencies can consider the following strategies for reviving livelihoods: The livelihood needs of earthquake victims are diverse and should be treated differently. For instance, food-for-work or cash-for-work can be good options in the short-run. Apiculture, tunnel production of vegetables, and mushroom cultivation, among others, are other viable options for income generation in the short-run. Some programs can be initiated immediately whereby earthquake victims specialized in farming can lease farm land from landowners for share cropping. There can be a possibility of leasing farm land in blocks for commercial farming. Here the government can play an intermediary role by facilitating the process. The government can link the earthquake victims with financial institutions and the agricultural input market. Similarly, the degraded forest can be handed to earthquake victims by making proper contractual arrangement. The earthquake victims can engage in agro-forestry and fodder crop for income generation in such areas without further deterioration. Entrepreneurial, social as well as technical skills of the resettled communities should be enhanced. Rural people are skilled in the production of handicrafts such as bamboo carpet, bamboo basket, hand looming and such other things. Identifying their skills and promoting them by providing loan, product standardization trainings and linking them with the market can help enhance their livelihood. Market integration is another aspect that must be prioritized. The new settlements will look like an agglomeration if they are not properly linked with formal or informal institutions. The consequence of this earthquake is also the loss of the century-old social capital and institutional linkages. Overall, the policy should focus on revitalizing the distorted labor market. The reconstruction of public and private infrastructures will absorb significant labor for years to come. With much-needed skill enhancement, the government can divert agricultural laborers into construction and manufacturing work.
#Nepal earthquake #April 25 earthquake aftermath #Nepal reconstruction
You May Also like: