Stereotypes of looks: Don’t be so judgemental!

What is a good look or bad look? Who sets the benchmark for them? Aren’t “good” or “bad” themselves adjectives, thus subject to interpretation and perception of the person who remarks something to be good or bad?

A few months ago, a friend had a bad but rewarding experience at a job interview in a school at Lalitpur with the interviewer, none other than the principal. My friend, at the very beginning of the interview, received a bad rap from the interviewer over his appearance. My friend did not find it necessary to follow the stereotype of an exaggeratedly groomed person and showed up for the interview in his casual apparel and, of course, with his long but well-organised hair and beard, which he had always been quite comfortable in. 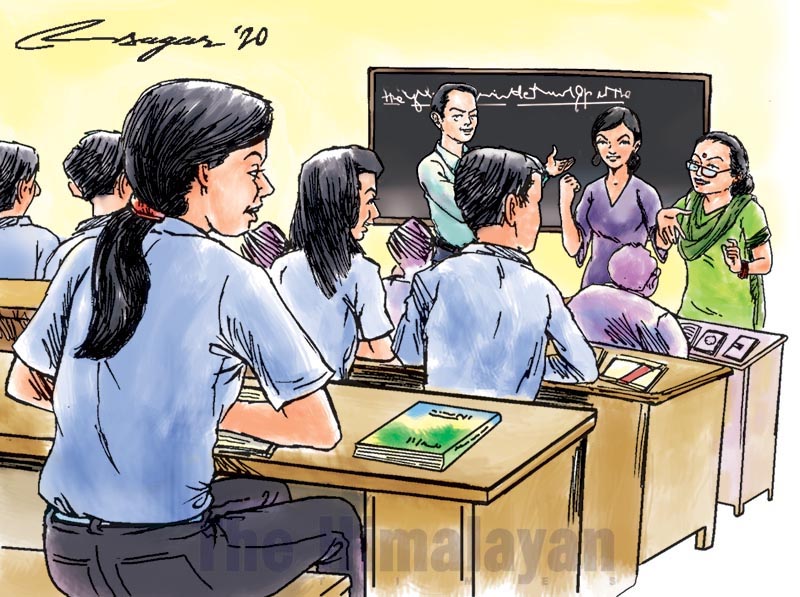 Illustration: Ratna Sagar Shrestha/THT
But the principal’s crass judgement about his appearance sapped him of his fervour for the interview, and he could not reciprocate the interviewer’s questions and remarks effectively (in English). This led the interviewer to believe that my friend was just a run-off-the-mill college graduate desperate to get a job on the basis of his mere college degree. But wait a minute, still water runs deep! What my friend told the interviewer in response to his cheap and off-the-cuff remark steered the whole interview to a U-turn. He asked my friend how many asterisks he had received on his academic mark sheet, implying how many times he had failed before getting through all the subjects. All of a sudden, the interviewer, who until then was in no mood to hire my friend on the basis of his exterior and the inability to tell things in fluent English, was now ready to accept my friend as an editor of his new science textbook, when my friend told him that he had graduated in science with physics major, securing 82% and then had secured third position in the merit list in the M.Sc (physics) entrance exam at the Central Department of Physics, Kirtipur. He also revealed that he had co-authored two books on chemistry for the bachelor’s students apart from teaching them chemistry. This incident serves as a point of departure for me in this write-up. Even educated lots like the principal of that school ended up being tempted to judge someone on the basis of the shallow attributes like spoken English skills and physical appearance - something totally irrelevant for the required eligibility criteria for a teaching post. How easily he forgot that command in English does not necessarily serve as a measure of intelligence and wisdom. Regarding the physical appearance, how the likes of him in our society forget that the dynamism of our society will sustain so long as every one of us learns to respect each other’s physical, social and cultural attributes. Isn’t being a teacher about inspiring kids to develop the autonomy of their thoughts, after all? If we teach our kids that such and such outer and changeable attributes of men and women are synonymous with being a member of that particular gender, then how can we create gender equality?  How can we justify short hair of women if we cannot take the long pony tails of men normally? If a person with long hair is synonymous with being something of a goonda, then why should we extol all those philosophers and scientists? On a similar note, recently, my “long” hair and beard happened to kick up an uncalled-for uproar and tongue-wagging among my colleagues when I returned to work after my month-long festival holidays. My hair received a bad rap because I, always a clean-shaven person before, appeared in a beard, and people, surprisingly, had the free time and energy to involve themselves in the chain of gossips regarding my new look. In a bid to respond to the gossips and make their presence felt, the school administration summoned me to remonstrate about my long hair because they say school teachers should not grow long hair as it sends a “wrong message” to the children. What is unsettling to me is that on the one hand we boast of following modern norms and values, which obviously involve individual liberty, but on the other hand we tend to dictate how a person should groom himself/herself. It is totally incongruous for employers to impose a particular kind of hairstyle and specific kind of dress on their employees unless it is absolutely required by the kind of job they are in. To break the monotony or to challenge the stereotypical look of a teacher or to experiment with a new look, I grew a beard during the month-long festival holidays. When I looked at myself in the mirror I felt very confident and comfortable about my new look. Let me reiterate, whatever be the shades of opinion about my appearance, I felt confident and comfortable. Fashion, trend or whatever you call it, is all about that, isn’t it? One of my executives expressed his objection over my long hair, asking what if one day I chose to keep dreadlocks. “Should we go to the lengths of allowing this, too?” he questioned empathetically. “You, I or anyone for that matter are not to dictate what is ok and how much is ok when it comes to people’s interest and choices,” said I. Is it really that people of a certain profession should be in conformity with the stereotypical image of a person in that profession? What is a good look or bad look? Who sets the benchmark for them and what are they? Aren’t “good” or “bad” themselves adjectives, thus subject to interpretation and perception of the person who remarks something to be good or bad? The bottom-line of my argument is: let people be what they want to be as long as it is not impinging upon someone else’s right.
#job interview #stereotypes #judgemental #good look #bad look #Stereotypes of looks #Looks
You May Also like: