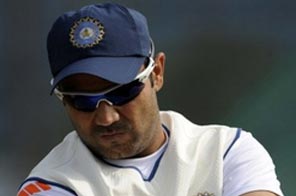 CHITTAGONG: India vice-captain Virender Sehwag has said Bangladesh are an "ordinary side" and cannot beat his world number-one team in a two-Test series starting here on Sunday.
"I don't think so," Sehwag said on Saturday when asked whether Bangladesh could beat India in Tests.

"Bangladesh can surprise anybody in one-day matches, but not in Tests. It's an ordinary side."

The hosts have won just three of their 61 matches since gaining Test status in 2000, losing 52 and drawing six. They have lost four of their five Tests against India, the lone draw coming in a rain-hit match here in 2007.

Bangladesh beat an under-strength West Indies 2-0 in an away Test series last year, but Sehwag said the hosts did not have the bowlers to put pressure on a strong Indian batting line-up.

India's batting has been strengthened with the return of veterans Sachin Tendulkar, Rahul Dravid and Venkatsai Laxman, who were not part of the side that lost a tri-series in Bangladesh recently.

India became the top-ranked team in Tests when they beat Sri Lanka 2-0 in a home series last year, but Sehwag said his side were focused more on playing good cricket than rankings.

"We are playing a Test match tomorrow and we're not thinking that we are number one, number two or number three. Yes, we have a Test against Bangladesh and we have to do well to win the match," he said.

Bangladesh skipper Shakib Al Hasan said his side were capable of giving a good account of themselves.

"I think we have a very good chance in this Test match. Hopefully, our boys will come up with their best," said Shakib.

"India have been ranked number one only recently. I think South Africa and Australia are much better than them. It's true that the Indians are playing very good cricket but still they are human.

"They can always make mistakes. If they make mistakes and we capitalise on them, we will be a very good team."

Bangladesh coach Jamie Siddons said his side were keen to prove that they were improving.

"We are not an extraordinary side. But we have proved in recent history that we are an improving side. We will take the Test day by day and hopefully prove Sehwag wrong," he said.

"Obviously, we have not got the attack that Australia or other Test-playing nations have at the moment. But we have got a spinner (Shakib) who is world class. We also have some good, honest fast bowlers."

Siddons also said the team could opt for a three-pronged pace attack because India were very good against spin.

It means Shafiul Islam, a 22-year-old seamer who made his one-day debut in the tri-series, is likely to win a Test cap.

Bangladesh will be without fast bowler and regular skipper Mashrafe Mortaza, who is recovering from a knee injury.

The second and final Test will begin in Dhaka on January 24.

#Bangladesh too ordinary to beat India: Sehwag
You May Also like: