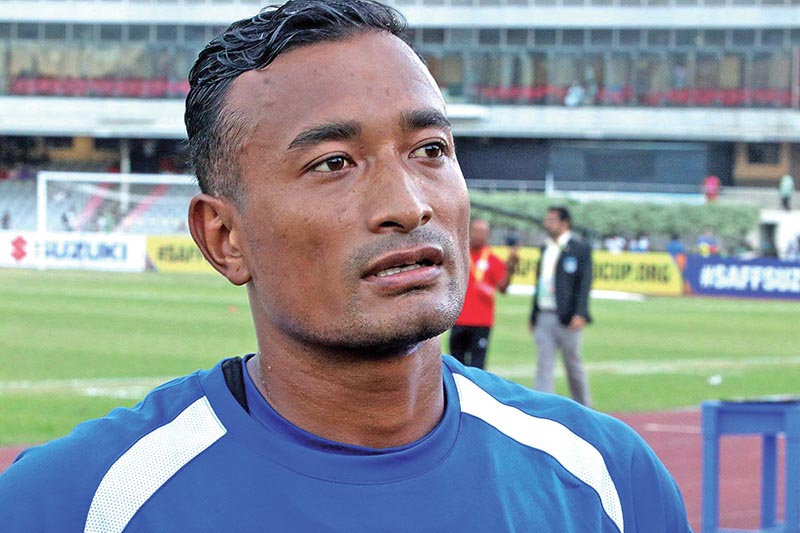 Kathmandu: Nepal coach Bal Gopal Maharjan started skipper Biraj Maharjan along with strikers Bharat Khawas and Nawayug Shrestha in the bench handing the captain’s armband to goalkeeper Kiran Kumar Limbu (Chemjong). Biraj had equalled Raju Kaji Shakya’s record of the highest cap of 68 in Nepal’s 2-1 loss against Pakistan two days ago and he was on the verge of making the history.

But coach Maharjan did not include defender Biraj — who had conceded a penalty against Pakistan with an unnecessary tackle inside the d-box — in starting lineup. Biraj, a key member of the national team for the last 10 years, finally entered the pitch in 84th minute replacing Dinesh Rajbanshi, when the team was 3-0 up against Bhutan, to become the most capped footballer of country. Former skipper Shakya held the record of 68 caps for national team in his illustrious career with three South Asian Games — twice as a player and once as a coach — titles under his belt.

Biraj is also one of the successful skippers of Nepal as he led his team to three titles in 2016 ending 23-year title drought. He was the captain of team that won gold medal in the 12th SA Games in India, Bangabandhu Gold Cup in Bangladesh and AFC Solidarity Cup in Malaysia.

#Bal Gopal Maharjan #Biraj Maharjan
You May Also like: