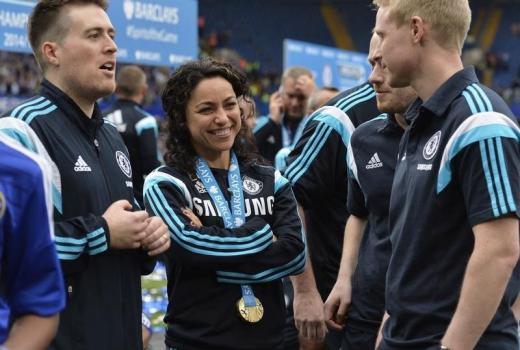 Chelsea first team doctor Eva Carneiro celebrates after winning the Barclays Premier League.
Action Images via Reuters
LONDON: Doctor Eva Carneiro has left Premier League champions Chelsea in the wake of last month's public spat with manager Jose Mourinho, according to several media reports on Tuesday. The club would not confirm the reports. "Afraid I cannot comment on internal staffing matters," a spokesman told Reuters. The Gibraltar-born doctor and physio Jon Fearn upset Mourinho by going on to the pitch to treat playmaker Eden Hazard during the opening league match of the season against Swansea City, a game at Stamford Bridge that ended in a 2-2 draw. It meant Hazard had to leave the field, putting Chelsea temporarily down to nine men as goalkeeper Thibaut Courtois had already been sent off. Mourinho said his medical staff had been "impulsive and naive" in a TV interview after the match, and took Carneiro and Fearn off first-team duty. The FA are investigating a complaint from a member of the public that the manager used obscene language against her at the time of the incident. Carneiro joined Chelsea in 2009.
#Chelsea #English Premier League #Jose Mourinho #EPL #Eva Carneiro
You May Also like: