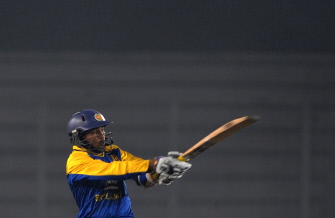 Sri Lankan cricketer Tillakaratne Dilshan plays a shot during the Tri-Nation Tournament at The Sher-e Bangla National Stadium in Dhaka on January 4, 2010. Sri Lanka are currently at 30 runs for the loss of no wickets as they chase the Bangladesh score of 260. Source: AFP

The in-form opener hit 104 for his sixth one-day hundred as Sri Lanka surpassed Bangladesh's 260-7 with more than five overs to spare in the day-night match.

Bangladesh were earlier well-served by Mohammad Ashraful, who made an impressive 75 to help his side post a competitive total.

Sri Lanka will now clash with India on Tuesday. Each side will play four league matches before the top two make it to the final on January 13.

Dilshan, who had smashed two centuries in India in a five-match series just before this tournament, put his side on course for an easy victory with a 148-run stand for the second wicket with skipper Kumar Sangakkara.

The Sri Lankan captain was more aggressive than his partner, scoring a 73-ball 74 with 10 fours before being caught behind off debutant seamer Shafiul Islam.

Sangakkara, who elected to field after winning the toss, said he did not want to bowl in the night because of the dew.

Bangladesh had a chance to dismiss Dilshan when the batsman was on 61 in a total of 156, but skipper Shakib Al Hasan failed to hold a return catch.

Man-of-the-match Dilshan, batting with a runner because of a hamstring injury during the later part of his knock, completed his century when he drove spinner Ashraful for a four.

Bangladesh were earlier struggling at 74-4 when Ashraful added 58 for the fifth wicket with Mushfiqur Rahim (35) and 95 for the next with Mohammad Mahmudullah (45).

"We batted really well, although some of our middle-order batsmen did not click today," said Shakib.

"The dew also hampered us as we had four spinners."

Ashraful reached his 20th half-century in one-day internationals with an aggressive shot, pulling paceman Suranga Lakmal for a four. He hit six boundaries in his 94-ball knock before being run out in the penultimate over.

Bangladesh scored 92 in the last 10 overs, with Naeem Islam (22 not out) smashing 20 in the closing over bowled by Lakmal.

The hosts made an impressive 65-run start through Tamim Iqbal (40) and Imrul Kayes (23) before losing four wickets in the space of nine runs, with Lakmal taking two.

Iqbal, struck on the helmet off paceman Chanaka Welegedara, smashed the bowler for four boundaries in the same over.

Lakmal put Bangladesh under pressure when he dismissed Raqibul Hasan for nought and Shakib for one in successive overs to reduce the hosts to 74-4.

#Dilshan stars in Sri Lankan victory
You May Also like: