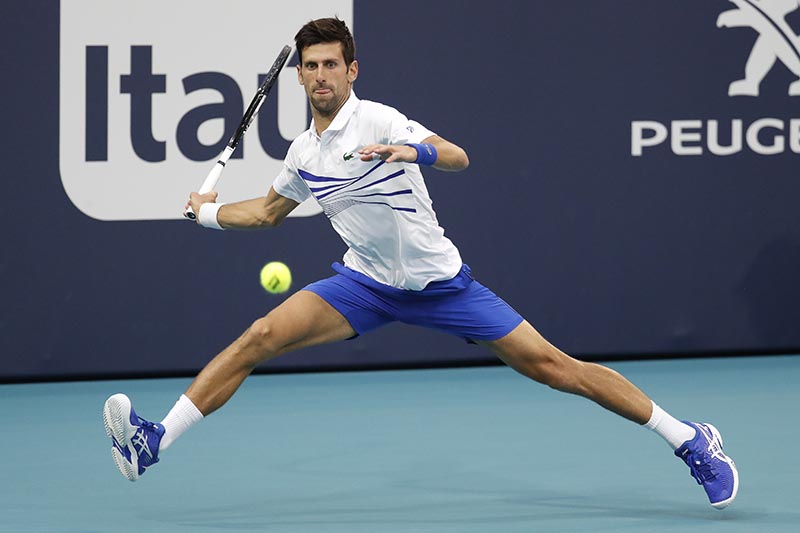 Novak Djokovic of Serbia reaches for a forehand against Federico Delbonis of Argentina (not pictured) in the third round of the Miami Open at Miami Open Tennis Complex, in Miami Gardens, FL, USA, on March 24, 2019. Photo: Geoff Burke-USA TODAY Sports via Reuters
MIAMI: World number one Novak Djokovic staved off a spirited challenge from Federico Delbonis for a 7-5 4-6 6-1 win in the third round at the Miami Open on Sunday. Like Roger Federer the previous day, top seed Djokovic found it tough going against an unseeded opponent before prevailing in two hours in the Florida twilight. Eighty-third ranked Delbonis, a left-hander with perhaps the highest ball toss in the game, took it to Djokovic in the second set but could not maintain his form in the final set. The result improved Djokovic's impressive record against Argentine players. According to the ATP Tour, only Juan Martin del Potro has beaten Djokovic, who is 36-3 against Argentines since 2007. Next up for the Serbian will be Spanish 22nd seed Roberto Bautista Agut, who prevailed 6-4 6-4 over Italian 15th seed Fabio Fognini. Earlier, defending champion John Isner unleashed 16 aces in a 7-5 7-6(6) victory over determined Spaniard Albert Ramos-Vinolas. Ramos-Vinolas broke Isner to start the match but the American saved the next four break points he faced to advance. "I did a lot of things well today," Isner said. "I played a good first set, even though I didn't start it off well. In the second, it wasn't quite as clean. "I'll talk to my coach and try to iron things out. But I'm into the round of 16 of a big tournament and I'm happy." The seventh seed will face Britain's 19th-seeded Kyle Edmund in the fourth round. Edmund beat Canadian 12th seed Milos Raonic 6-4 6-4. Isner has practised with Edmund in Miami and they have split two meetings.
#Novak Djokovic #Federico Delbonis #Miami Open
You May Also like: