Federer and Serena move up a gear 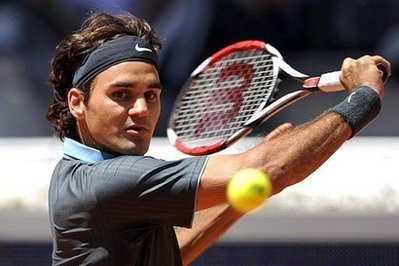 MELBOURNE: Top seeds Roger Federer and Serena Williams moved up a gear Saturday with straight sets wins as they closed in on more silverware at the Australian Open.

The world's premier players have 26 Grand Slam titles between them and both look primed to add to their collections.

The Swiss great made short work of Spanish 31st Albert Montanes 6-3, 6-4, 6-4 while Williams completed a 6-0, 6-3 demolition of Carla Suarez Navarro as the fourth round of the opening Grand Slam of the season was finalised.

Federer, with 15 Grand Slam titles, now faces a round of 16 clash against Hewitt, who was in good touch against Marcos Baghdatis before the Cypriot retired with a shoulder injury while trailing 6-0, 4-2.

"I've come through a difficult draw, I feel physically fine and mentally fresh, but the opponents will get tougher from here," said Federer.

"So far it's been great. Obviously you elevate your game gradually as the opponents get harder, so I'm happy the way I feel."

Williams will next take on the imposing Stosur.

The Australian 13th seed outclassed Italy's Alberta Brianti 6-4, 6-1 and is gunning for another crack at Williams, who she beat when they last met in Stanford in July.

"We've had a couple of close matches the last two times we've played and I got the last one so I'm going to ride with that and go into the match feeling pretty confident," Stosur said.

Williams was also looking forward to the rematch.

"I think she's playing great. She beat me the last time we played, so she has a lot of momentum. A ton of momentum," she said.

"I definitely expect the crowd to root for Sam. Hopefully, my mom will cheer for me. I should be fine."

Also pushing through were Azarenka, who destroyed Italy's Tathiana Garbin 6-0, 6-2, and Zvonareva, a 6-1, 7-5 winner over Argentine Gisela Dulko.

They will play each other for a place in the quarters.

"I think I did very well today. I had a good game plan and I definitely played to it very well," said Azarenka.

"I was going for my shots and playing comfortably and confident."

Chinese hope Li Na also stayed in the tournament with a three-set win over off-court friend Daniela Hantuchova and will next battle Denmark's Wozniacki, who shattered the dreams of Israel's Shahar Peer in straight sets.

Like Federer, Serbian third seed Djokovic, the 2008 champion, was also in imposing form as he crushed Uzbekistan's Denis Istomin 6-1, 6-1, 6-2.

"I think at some stage in the tournament you want to have a straight sets win, an easy win, so you can get fast off the court and try to save all the energy as much as you can for the upcoming challenges," said Djokovic.

"So it was good to have the match like this."

He will next play unseeded Pole Lukasz Kubot, who was handed a free ride when Russian 20th seed Mikhail Youzhny withdrew with a wrist injury.

Russian sixth seed Davydenko stayed on the boil with a 6-0, 6-3, 6-4 hammering of Argentina's Juan Monaco and now faces a tough match against ninth seeded Fernando Verdasco.

The Spaniard booked his place in the last 16 when Austrian Stefan Koubek retired with a virus after losing the first set of their match.

#Federer and Serena move up a gear
You May Also like: