Federer in, Wawrinka out on mixed day for Swiss 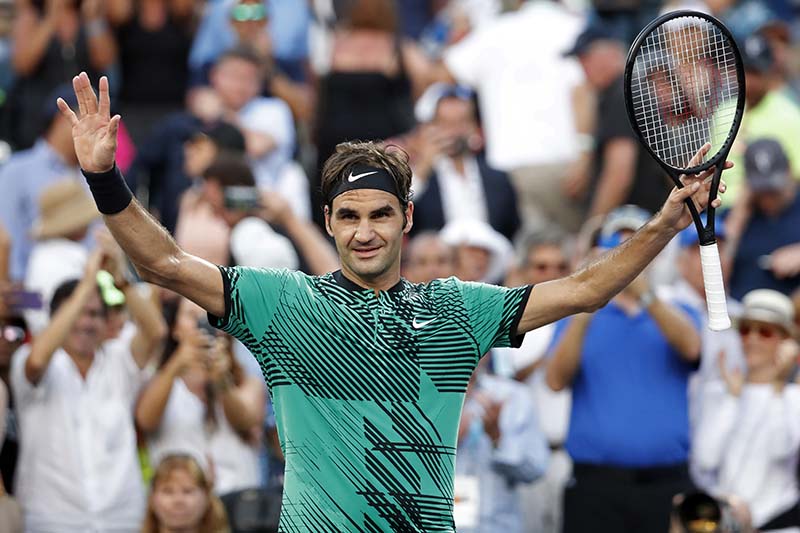 Roger Federer of Switzerland celebrates after his match against Roberto Bautista Agut of Spain (not pictured) on day eight of the 2017 Miami Open at Crandon Park Tennis Centre, in Miami, Florida, on March 28, 2017. Photo: USA Today Sports via Reuters
GENEVA: Roger Federer survived a stern test from Spain's Roberto Bautista Agut to reach the Miami Open quarter-finals on Tuesday, while top-seeded Swiss compatriot Stan Wawrinka was eliminated on his birthday. Federer clinched the 7-6(5) 7-6(4) victory on his third match point, shortly after Wawrinka fell 4-6 6-2 6-1 to 16th-seeded German teenager Alexander Zverev. Bautista Agut played the match of his life, hitting the ball deep with relentless precision in an effort to keep Federer pinned to the baseline, giving the 18-times grand slam champion everything he could handle. But Federer's class proved the difference in the tiebreaks as he improved to 6-0 lifetime against Bautista Agut and advanced to a showdown against Czech 10th seed Tomas Berdych. Wawrinka, who turned 32 on Tuesday, lost to Federer in the Indian Wells final nine days ago and was denied a chance of setting up a possible rematch in Miami. A day after saving three match points against John Isner, the 19-year-old Zverev dominated the final two sets against Wawrinka, breaking twice in the second and three times in the third to earn a quarter-final encounter Nick Kyrgios. "One bad game to start the second set and then it was tough for me," Wawrinka told reporters. "I completely went down physically and mentally, and also my tennis was completely out. I had no more gas." Zverev played more aggressively after dropping the first set and the German prospect improved to 2-0 against Wawrinka. "I had to be aggressive. I felt like he was the one controlling all the points all the time, so I had to change that. It worked out well for me," Zverev said. The last eight match against the 12th seeded Australian brings the pair together for the second time in two weeks, after Kyrgios won their previous encounter in Indian Wells. Big-serving Kyrgios looked ominous as he warmed up for the match by not dropping serve in a 7-6(5) 6-3 victory over Belgian eighth seed David Goffin All the top seeds had competitive matches on Tuesday, with Japanese second seed Kei Nishikori taken to three sets before ousting Federico Delbonis of Argentina 6-3 4-6 6-3. Fifth seed Rafa Nadal won in straight sets, but had to work hard to beat Frenchman Nicolas Mahut 6-4 7-6(4). Next up for Nadal is American Jack Sock, while Nishikori meets Italian Fabio Fognini.
#Stan Wawrinka #Roger Federer #Roberto Bautista Agut #United States of America #Alexander Zverev #Miami Open
You May Also like: