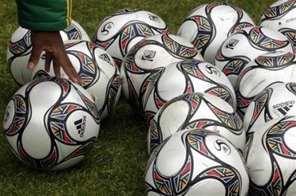 South Africa's kit manager counts the soccer balls after training at the Orlando stadium in Soweto, South Africa, Thursday June 11, 2009. South Africa are competing in the Confederations Cup soccer tournament that will get underway on June 14. Source: AP Photo/Themba Hadebe

JOHANNESBURG: South Africa's countdown to the World Cup begins in earnest on Sunday when the Confederations Cup kicks off, with Brazil, Italy and Spain battling for supremacy.
The tournament of continental champions is the traditional dress rehearsal for football's showpiece event and the host nation do not want any hiccups.
The government has deployed 8,000 police officers in the four host cities -- Johannesburg, Pretoria, Bloemfontein and Rustenburg -- to ensure security while transport and other infrastructure will be put to the test.
So far, around 70 percent of tickets have been sold but organisers are confident all 16 games will be sold out.
South Africa take on Asian champions Iraq in the opening game but those two teams, along with New Zealand, Egypt and United States, are likely to be a sideshow to Spain, Italy and Brazil.
The trio have brought mostly full-strength squads, and that means the likes of new Real Madrid signing Kaka, Manchester City's Robinho, Liverpool star Fernando Torres and Arsenal captain Cesc Fabregas will be on show.
Defending champions Brazil arrived in chilly South Africa Thursday fresh from beating Paraguay 2-1 to top South American World Cup qualifying and coach Dunga is in a confident mood.
"I think that we are on the right track and if we can win the Confederations Cup it will set us up well for next year's World Cup," he said.
They are drawn in Group B alongside world champions Italy and the United States with their first taste of action on Monday in Bloemfontein against Egypt.
Italy, who were handed a wake-up call in their 4-3 friendly win over minnows New Zealand this week, play the United States on the same day in Pretoria.
The top two from each group qualify for the semi-finals, ahead of the final on June 28.
Marcello Lippi's side come into the tournament wanting to draw a line under their disappointing Euro 2008 campaign and lay down a marker ahead of their World Cup title defence, for which qualification looks a sure bet.
The 61-year-old's squad is peppered with players who starred in Italy's World Cup win over France in Berlin three years ago including captain Fabio Cannavaro, keeper Gianluigi Buffon and Bayern Munich striker Luca Toni.
"We will do what we can to win the Confederations Cup, but if we don't succeed we won't be pulling our hair out," said Lippi.
"We've said amongst ourselves whoever wins the Confed Cup doesn't win the World Cup."
They play Brazil in the tournament glamour clash on June 21.
But for many, Spain is the favourite here. They are firing after a 6-0 mauling of Azerbaijan this week which extended their unbeaten streak to 32 games -- three games short of matching a record set by Brazil 13 years ago.
They open their tournament against New Zealand Sunday in Rustenburg with coach Vicente Del Bosque saying they only have victory on their minds.
"We have to enhance this competition which has been won by big teams," he said.
"All the teams taking part are here with their best players so we will also have our best team. We want to win."
Del Bosque's side -- ranked number one in the world -- then meet Iraq three days later and South Africa on June 20.
The Kiwis, despite pushing Italy, will do well to grab a point, while Iraq, under the experienced Bora Milutinovic, will be buoyed by their warm-up draw with Poland after a form slump since winning the Asian Cup in 2006.
Domestic expectations for hosts South Africa are high with most football followers wanting at least a semi-final berth, although their preparations have been overshadowed by a dispute over bonuses.
Egypt, who are missing injured striker Amr Zaki, are unlikely to go that far with Brazil and Italy in their group. The same applies for the United States.

#Focus on South Africa as Confederations Cup begins
You May Also like: