Germany on brink of World Cup after Norway demolition 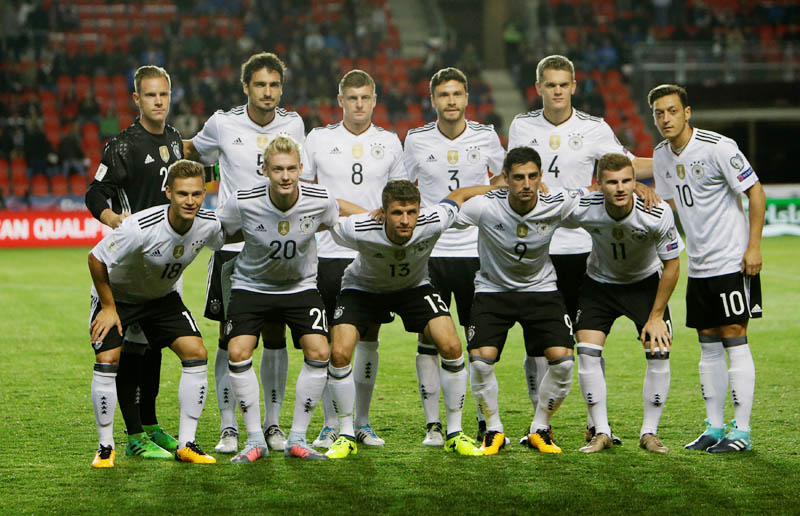 Germany players pose for the pre match photograph. Photo: Reuters
STUTTGART: World champions Germany thrashed Norway 6-0 in their Group C match on Monday, scoring four times in the first half including a Timo Werner double, to edge closer to a place at next year's World Cup in Russia. The Germans killed off the game in a whirlwind first half, scoring three times in the opening 21 minutes, and can wrap up qualification away to second-placed Northern Ireland, who beat the Czech Republic 2-0, on Oct. 5. Four-time world champions Germany, who also scored through Mesut Ozil, Julian Draxler, Leon Goretzka and Mario Gomez, need a point from their last two games -- in Belfast and three days later at home to Azerbaijan -- to book their ticket to Russia. The Irish are five points behind the Germans, who have a maximum 24. The group winners qualify directly for the finals while the eight best second-placed teams in the nine groups go into a playoff round. It was one-way traffic from the start as Germany wanted to put last week's scrappy 2-1 win in the Czech Republic behind them and Ozil's 10th minute shot opened the floodgates. "After the Czech game we said we wanted to bring a different spirit into the team, a different approach," said coach Joachim Loew, whose team have so far enjoyed their best ever World Cup qualifying campaign with eight wins, having conceded two goals. "Especially in the last third of the pitch we wanted to find the spaces and play into them. When you do that then you create chances and we did that," he added. Seconds after Germany took the lead Toni Kroos should have doubled it but he fired over the bar. Draxler, however, made no mistake with a fine turn and low drive in the 17th during a frantic opening spell. Werner, who was booed by a small group of German fans during the game in Prague on Friday, made it 3-0 four minutes later with the Norwegians in a daze and the Stuttgart native grabbed his sixth goal in his eighth international as he headed in a cross five minutes before the break. Goretzka headed home Draxler's cross in the 50th and fellow substitute Gomez had time to get on the scoresheet himself with yet another header to cap a dominant performance by the hosts. Germany have now won 26 of their last 31 World Cup qualifiers, having drawn the other five.
#Germany #Mesut Ozil #Julian Draxler #Leon Goretzka #Timo Werner #World Cup qualifer
You May Also like: