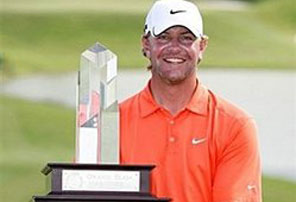 Lucas Glover, the 2009 US Open champion, poses with the trophy after winning the PGAGrand Slam of Golf at Port Royal Golf Course in Southampton, Bermuda. Source: AFP

SOUTHAMPTON PARISH: Reigning US Open champion Lucas Glover fired a five-under 66 to easily win the 1.35-million-dollar PGA Grand Slam of Golf by five strokes on Wednesday.
American Glover earned 600,000 dollars in prize money by posting a two-day total of 131 at the Port Royal Golf Club course.
The 36-hole Grand Slam event comprises the four major championship winners of the year.
Masters winner Angel Cabrera also shot a final-round 66 but still finished five strokes adrift of Glover.
British Open champ Stewart Cink was six shots back after shooting 70 Wednesday for third place. South Korea's Yang Yong-Eun, the PGA Champion, was 10 shots back in fourth place after a final-round 70.
"Everybody else was off to a pretty quick start, and Stewart got off like wildfire, and Y.E. and Angel the same, and I was just kind of there," said Glover.
"I got it turned around there towards the end of the front nine and played pretty good golf from there."
Glover opened his tournament with a course-record 65 in the first round. He birdied the fifth and seventh holes in the second round to hold off a rally from Cink and stay in contention. He added another birdie on No. 9 but it was on the back nine where he made his move with additional birdies on 10 and 11.
Cink started quickly with back-to-back birdies to open his round but was undone by a double bogey on the back nine. He beat Tom Watson in a playoff to win the British Open in July.
Former winner Cabrera and Yang both rolled in eagles in their rounds. Yang's early charge was derailed by four bogeys on the back nine.
"It was a tough round again, very tired, just can't get over jet-lag right now," Yang said.
Glover's five-shot victory was the largest winning margin since Tiger Woods beat Phil Mickelson in 2005 by seven strokes.

#Glover captures Grand Slam event by five strokes
You May Also like: