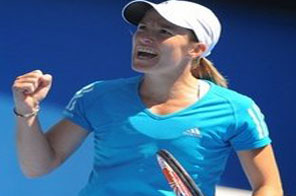 Justine Henin of Belgium celebrates winning a point during her quarter-final match against Russian opponent Nadia Petrova on day nine at the Australian Open in Melbourne. Henin won the match and is playing China's Zheng Jie in Thursday's second semi-final. Source: AFP

MELBOURNE: Belgium's Justine Henin will be hoping that it is her fairytale people are talking about when the Australian Open women's semi-finals are decided on Thursday, and not a Chinese one.

The 27-year-old is playing her first Grand Slam since coming out of an 18-month retirement.

Ever since she announced her return to tennis the talk has been about whether she could emulate countrywoman Kim Clijsters, who won last year's US Open on her own comeback.

But the former world number one has increasingly had to share the limelight with Zheng Jie and Li Na, who have created history by becoming the first two Chinese to make the last four of a Grand Slam.

All indicators point to a blockbuster final between 2004 champion Henin and four-time winner Williams.

Henin has retained all her legendary fighting spirit in her time away but she has been kept on court for a total of nine hours in her last four rounds and admits her body is struggling to hold together.

"Physically it hasn't been easy the last few days," she conceded.

Henin, who beat Nadia Petrova in the quarter-finals, said she came into the tournament without many expectations but was now allowing herself to dream of glory.

"Of course, I have dreams, I'll try to go as far as possible," she said.

"If it's till the end, it would be amazing."

She will first have to get past the steadily improving Zheng, who started slowly in this year's tournament but who demolished Maria Kirilenko 6-1, 6-3 in the quarter-finals.

Zheng and Henin have played once before, in 2005 when the Belgian won in straight sets.

The 26-year-old from Chengdu revealed that Henin is her third favourite player of all time, behind Steffi Graf and Roger Federer, and admitted it would not be easy playing her.

"Firstly I like her because she is so strong mentally," Zheng said.

"I always watch her play -- I enjoy watching her play.

"Secondly, I think it is a tough match for me, a big challenge, but I'm looking forward to it."

For a long time it looked as though Li would be playing Belarus's Victoria Azarenka in the semi-finals and not Serena.

Li has a good record against Serena.

Although she has won only one of four meetings, she has taken her to three sets in two of those losses and a second set tiebreak in the other.

Li will enter the world top 10 at the end of this tournament but stressed she did not want it to end for her on Thursday.

"I know the tournament's not finished, it's not the end," Li said after beating Venus. "Hopefully it will continue for me."

After watching Venus throw away her chance to make the semi-finals, Serena acknowledged that Li will be a serious test of character.

#Henin looking for fairytale ending at Aussie Open
You May Also like: