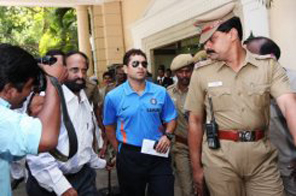 Tendulkar leaves for the airport on his way to Sri Lanka Source: AFP

MUMBAI: Coach Gary Kirsten said Wednesday India needed to be consistent in the ongoing tri-series in Sri Lanka to become the world's best one-day team.
India, who have won five successive bilateral series, will top the one-day rankings if they beat both Sri Lanka and New Zealand in the league stage and also win the final on September 14.
"We have set our goals," Kirsten said ahead of the team's departure for Colombo. "One of them is to be the best team in the world. We are headed that way and we are very excited.
"We have to perform well as we continue the quest to be the best. We won the last two series in Sri Lanka and we are confident."
India are without injured opener Virender Sehwag and paceman Zaheer Khan, but Kirsten said the team had the depth to do well.
"Obviously, missing a player like Sehwag is huge," the former South African opener said. "He is a quality batsman, but we have got a lot of depth in our cricket at the moment.
"We have done well in Sri Lanka and are familiar with the conditions. We know we are playing against two good teams, but we have been performing well and we need to maintain our performance."
India open their campaign against New Zealand on Friday and play the hosts the next day. Each side will play two league matches before the top two make it to the final.
Kirsten said the toss would be vital on low, slow Sri Lankan pitches, where chasing a target under lights was not easy.
New Zealand found runs hard to come by on Tuesday when they were bowled out for 119 in reply to Sri Lanka's 216-7 in the opening match.
"Winning the toss is quite important," said Kirsten.
"But if you are going to be a world-class team, you need to win from any situation or condition. We have a good batting line-up which is flexible in the middle order."
He said Rahul Dravid's return to one-day cricket after nearly two years also augured well for the team.
"It is good to have him in the team. With that sort of experience, he is always going to help the team," said Kirsten.
Dravid is only the second batsman in the current team after Sachin Tendulkar to have completed 10,000 runs in one-day internationals.
India's squad: Mahendra Singh Dhoni (captain), Sachin Tendulkar, Gautam Gambhir, Rahul Dravid, Suresh Raina, Yuvraj Singh, Yusuf Pathan, Harbhajan Singh, Praveen Kumar, Ishant Sharma, Ashish Nehra, Rudra Pratap Singh, Amit Mishra, Dinesh Karthik, Abhishek Nayar.

#India eye No 1 ranking in Sri Lanka
You May Also like: