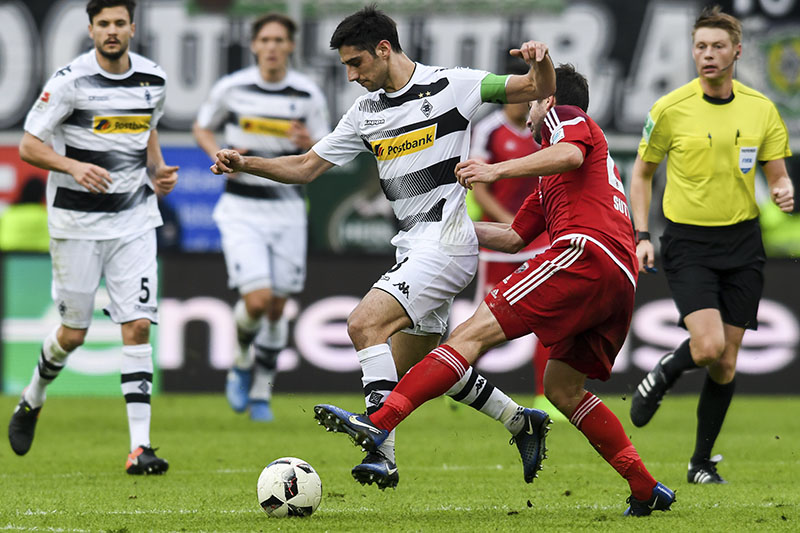 Gladbach's Lars Stindl (left) and Ingolstadt's Markus Suttner in action during the Bundesliga soccer match between FC Ingolstadt 04 and Borussia Moenchengladbach at the Audi Sportpark in Ingolstadt, Germany, on Sunday, February 26 2017. Photo: Armin Weigel/dpa via AP

BERLIN: Borussia Moenchengladbach captain Lars Stindl is scoring so much lately it seems the ball will go in no matter what he does.

Stindl's questionable goal — scored with his arm — set his side on its way to a 2-0 win at relegation-threatened Ingolstadt in the Bundesliga on Sunday.

"I don't want to imply that Lars Stindl had the intention. He can certainly do nothing about the handball. But it's indisputable that it is a handball and therefore a free kick for us ... it's not about intention, but hand, yes or no," Ingolstadt coach Maik Walpurgis said.

The 28-year-old Stindl, who scored a hat trick in 'Gladbach's come-from-behind 4-2 victory at Fiorentina in the Europa League on Thursday, also had three important goals in previous Bundesliga games. He instigated another improbable come-from-behind win with two at Bayer Leverkusen and broke the deadlock against Freiburg.

Stindl scored on the hour-mark in Ingolstadt after a corner that he tried to head. The ball hit his chest and then his right arm before going in.

"The rule is a bit soft and gives us the right to say it complies," 'Gladbach coach Dieter Hecking said. "The rule is the problem. If the referee had gone to Lars, then I would have expected him to say it was (his) hand."

Josip Drmic went close for 'Gladbach 15 minutes later as more space became available but it was just one chance from only a few in a game lacking highlights.

Stindl was taken off with three minutes remaining, before Mahmoud Dahoud set up Andre Hahn to seal the win in injury time.

Also Sunday, struggling Wolfsburg fired coach Valerien Ismael after the side's latest loss — 2-1 at home to Werder Bremen on Friday — left it two points above the relegation zone after 22 rounds

The Volkswagen-backed club said in a statement that Ismael's tenure was over" with immediate effect" and that a new coach could be presented as soon as Monday.

Alessandro Schoepf scored with his knee to a cross from winter signing Guido Burgstaller to get Schalke off to a great start in the fifth minute.

The hosts failed to press their advantage, while Steven Zuber and Kerem Demirbay both missed good chances for Hoffenheim.

Hoffenheim dominated possession and out-shot Schalke by eight efforts compared to three in the first half.

Sebastian Rudy, playing his 200th competitive game for Hoffenheim, claimed the equaliser with around 10 minutes remaining, heading in after Kevin Vogt sent a long ball forward for Zuber to cross from the left.