Liverpool beat Watford 1-0 in EPL with Can highlight goal 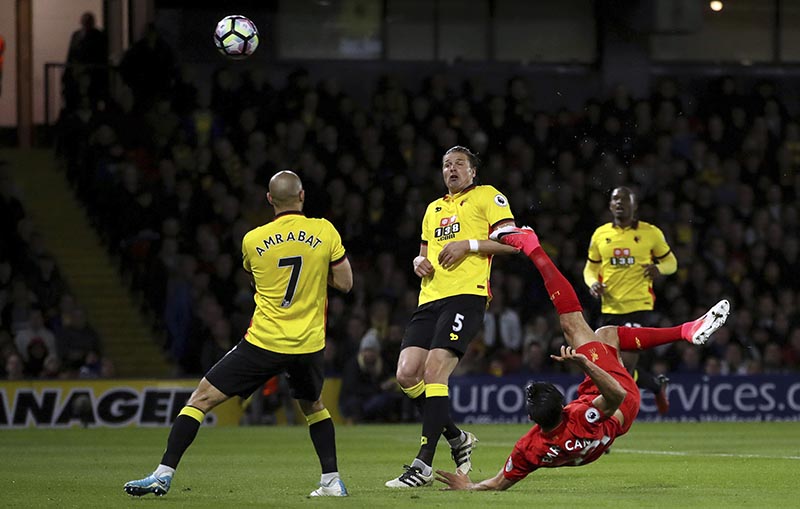 Liverpool's Emre Can scores against Watford during the English Premier League soccer match at Vicarage Road, London, on Monday, May 1, 2017. Photo: John Walton/PA via AP
WATFORD: Liverpool improved its bid to secure a Champions League spot by beating Watford 1-0 in a largely forgettable English Premier League match on Monday. Only Emre Can made this one memorable, by meeting a Lucas Leiva cross with a bicycle-kick score in first-half stoppage time. "I have never scored a goal like that, maybe when I was younger. That is the best goal I've ever scored," Can said. "I saw the space and I ran behind and my first thought was that I wanted to head it, then I didn't think too much." League rivals Manchester City, Manchester United, and Arsenal dropped points in the race for a top four position, so a win was vital for Liverpool, which has struggled against teams in the bottom half. The Reds moved four points clear of fifth-placed United, though they have played an extra game. "Everything is in our hands," Can said. "If we win the three (remaining) games we are in the Champions League. We are confident." The victory came at a cost, as forward Philippe Coutinho lasted less than 10 minutes.
#Liverpool #Watford #English Premier League football #Emre Can
You May Also like: