MMC leaving for B’desh to participate in International Club Cup 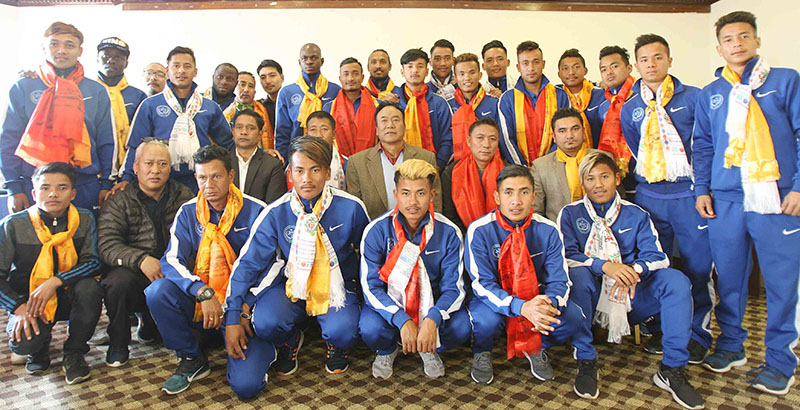 Players and officials of MMC pose for a group photo after a farewell programme in Kathmandu on Tuesday, February 14, 2017. Photo: THT

A 31-member team of Laxmi Hyundai Manang Marshyangdi Club is leaving for Bangladesh on Wednesday to take part in the Sheikh Kamal International Club Cup to be held in Chittagong February 18 to March 2.

MMC will play their opening match against Mohammedan Sporting Club on February 19, before facing Shaheen Aswayee FC on February 22 in their second match and play against Chittagong Abahani two days later. The semi-finals are slated for February 26 and 27, while the final will be played on March 2.

Meanwhile, All Nepal Football Association Honorary President Tashi Ghale and ANFA acting General Secretary Sanjeev Mishra bade farewell to the team. Ghale said MMC were one of the best clubs in Nepal and hoped the club will be victorious in Bangladesh. “The team is boosted with strong players and we are capable of winning matches,” he said. “A lot of people, including me, will travel to Bangladesh to support the players if they reach the final,” he added.

Regarding the AFC Asian Cup Qualification, Ghale said the ANFA needed to pressurize the government to prepare the Dasharath Stadium for national team’s home matches. “As we have got the opportunity to compete in the tournament, the players deserve the chance to play the home matches on home soil,” he added.

ANFA acting General Secretary Mishra hoped MMC would be successful in Bangladesh. “MMC have proved their strength by winning most of the domestic tournaments and I hope they will put up a good show in Bangladesh as well,” said Mishra. “MMC have participated in international tournaments in the past and I think they will excel this time around,” he added.

Meanwhile, the club handed over Rs 35,000 — 40 per cent of the prize money of the Far-west Khaptad Gold Cup, Aaha-Rara Gold Cup and Jhapa Gold Cup — each to the team members as a reward of winning the titles.