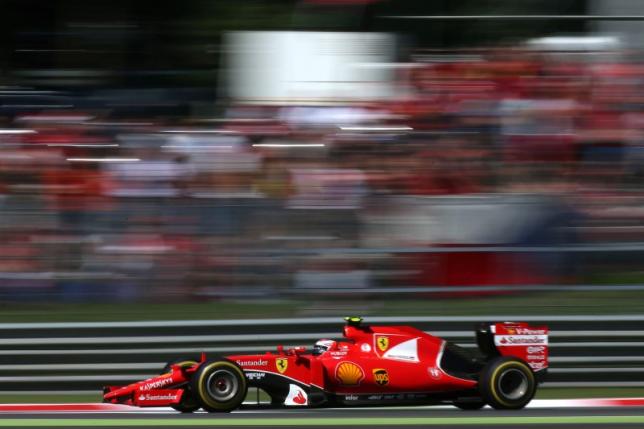 Ferrari's Kimi Raikkonen in action. Photo: Action Images / Hoch Zwei
Livepic/Reuters
MONZA: The glass was half full for Ferrari team boss Maurizio Arrivabene after Sunday's Italian Grand Prix, even if Kimi Raikkonen filled it almost to the brim before sloshing the contents around. With Sebastian Vettel taking second place in his first race in Italy in red Ferrari overalls, the home team could hold their heads high even if they never came close to catching Lewis Hamilton's Mercedes. Raikkonen, Ferrari's 2007 world champion, had outqualified Vettel and started on the front row to the delight of a legion of tifosi -- including Italian Prime Minister Matteo Renzi and Ferrari chairman Sergio Marchionne. Then it all went wrong. The Finn was left standing as everyone else pulled away, cars veering around him to the left and right, before getting going and entering the first corner in last place. He ended up fifth after a strong fightback, helped by a rare Mercedes engine failure that denied Nico Rosberg a place on the podium. Ferrari remained second overall in the constructors' championship, with Mercedes disappearing into the distance. "Yesterday, Kimi had done a great qualifying and we were all pleased," said Arrivabene. "Today he got, most probably, messed up a bit, we need still to check but most probably messed up a bit with the finger (in releasing the clutch). "But during the race he overtook many, many other cars and his race was fantastic I have to say." So too was Vettel's race, with the four times world champion thrilled to be back on the Monza podium and in front of the heaving wave of cheering fans spilling out of the stands onto the pit straight. "It’s the best second place I ever had. The emotions on the podium are incredible," the German told reporters. "If we take this (circuit) away from the calendar for any... money reasons I think you are basically ripping our hearts out." The circuit, which has hosted races since the 1920s and featured on the calendar in every season but one since the world championship started in 1950, faces an uncertain future with its current contract ending next year. Raikkonen, a fan favourite, said he had never experienced a start problem like Sunday's before and had not done anything different to usual. "Obviously it's not ideal," said the Finn with his usual understatement. "You’re in a good position for the start and then after a few seconds we were last so the front row didn’t help us a lot did it? "The weekend has been good apart from that issue and then obviously its fine to get back to fifth, when you start from second place, with that kind of start."
#Ferrari #Racing #Formula One #Italian Grand Prix #Ferrari team #Maurizio Arrivabene #Kimi Raikkonen
You May Also like: