Murray on cruise control at Queen's 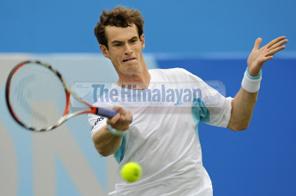 British player Andy Murray hits a shot during the singles game against Andreas Seppi of Italy during the second round match at The AEGON Championships tennis tournament at Queen's Club in west London on June 10, 2009. Murray won the game 6-1, 6-4. Source: AFP PHOTO Adrian Dennis

LONDON: Top seed Andy Murray made the perfect start to his Wimbledon build-up with a 6-1, 6-4 victory over Italy's Andreas Seppi in the second round at Queen's on Wednesday.
Murray, ranked third in the world, is the first Briton to be seeded number one at the pre-Wimbledon warm-up event and he looks capable of living up to that billing after brushing aside Seppi with contemptuous ease.
The Scot will play Spain's Guillermo Garcia-Lopez, a 7-6 (7/3), 6-3 winner over Gilles Muller, in the last 16.
Murray is ranked 45 places above Seppi in the Tour standings and even that gap didn't look wide enough as he broke early before taking the opening set in just 22 minutes.
Another break for Murray at the start of the second set was followed by the first flicker of life from Seppi as the Italian broke back. But Murray just raised his game a level and broke again to go through.
Murray said: "My serve could have been a little bit better, but I was happy with the way I moved and didn't make too many errors. It was good to get a comfortable start."
While Murray had it easy, Australia's Lleyton Hewitt had to dig deep for a 3-6, 6-2, 6-2 victory over Frederico Gil that kept alive his bid for a record fifth Queen's title.
Hewitt treats Queen's as a second home after dominating here over the last decade, but those triumphs seemed a life-time away as the 2002 Wimbledon champion was initially out-played by an opponent who had only won once previously on grass.
Hewitt, the 15th seed, looked in trouble after the first set but the 28-year-old has never lacked heart, as he showed by coming from two sets down to beat Ivo Karlovic in the French Open recently.
He hit back to take the second set before finishing off the Portuguese ruthlessly in the third to set up a clash with fellow four-time champion Andy Roddick.
"I didn't play my best set of tennis at the start. I just didn't serve well and didn't execute, but after that I started feeling more comfortable," Hewitt said.
Nicolas Mahut produced the first major surprise as the Frenchman defeated fifth seed Marin Cilic 7-6 (7/1), 7-6 (7/4) in the second round.
Mahut, runner-up at Queen's in 2007, has hardly played this season due to shoulder problems, but he quickly found his rhythm on a surface perfectly suited to his bold stroke-play.
The 146th ranked Mahut took the first set on a tie-break and did the same in the second to clinch a famous victory.
Mahut revealed he lost his favoured racquet just before the match, but the thrill of being back at Queen's helped him through.
"My racquet just disappeared before my match. Maybe a player took it by mistake," he said. "But Queen's is my favorite tournament. I have so many great memories and the crowd were fantastic with me."
Mahut faces Ivo Karlovic next after the big-serving Croat hit 33 aces to beat France's Julien Benneteau 7-6 (9/7), 6-7 (4/7), 6-2.
Mikhail Youzhny, the Russian 14th seed knocked out former Australian Open finalist Marcos Baghdatis with a 6-4, 7-6 (7/3) victory.
Youzhny plays Gilles Simon, the French third seed, who defeated Bulgarian teenager Grigor Dimitrov, 7-6 (9/7), 7-6 (7/5).
Former world number one Marat Safin was forced to pull out with a back injury just hours before his match against Belgian qualifier Xavier Malisse.
Safin was replaced in the draw by South Africa's Rik de Voest, who lost 7-6 (8/6), 7-6 (10/8) to Malisse.
Malisse plays former French Open champion Juan Carlos Ferrero, who eliminated France's Paul-Henri Mathieu, seeded 11th, 6-4, 6-4.
French fourth seed Gael Monfils withdrew with a wrist injury, handing Belgium's Steve Darcis, a 6-2, 6-4 winner over Alberto Martin, a walkover into the last eight.

#Murray on cruise control at Queen's #while Hewitt digs deep
You May Also like: