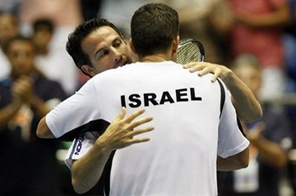 Israel's Harel Levy celebrates with team captain Eyal Ran (background) at their Davis Cup tennis match in Tel Aviv in early July. The country goes into the first day of their Davis Cup semi-final tie with Spain on Friday buoyed by the absence of world number three Rafael Nadal from the defending champions' line-up. Source: AFP

PARIS: Israel go into the first day of their Davis Cup semi-final tie with Spain on Friday buoyed by the absence of world number three Rafael Nadal from the defending champions' line-up.
Nadal, a six-time Grand Slam winner, was named in captain Albert Costa's original squad but was ordered to rest by doctors after suffering from an abdominal problem at the US Open, where he was eliminated in the semi-finals.
The 23-year-old's place for the claycourt tie, which takes place between Friday and Sunday at the Polaris World la Torre Golf Resort in Murcia, has been taken by world number 21 Juan Carlos Ferrero.
Nadal's absence is a blow to Spain's hopes of becoming the first country to defend their title since Sweden in 1998 but it gives a glimmer of hope to Israel, who will make their first appearance at this stage of the tournament.
Eyal Ran's team have been in impressive form this year, edging Sweden 3-2 in the first round in March and stunning two-time champions Russia 4-1 when the sides met in the quarter-finals in July.
Spain, though, have won all three of their previous Davis Cup meetings with Israel and boast an impressive record of 16 straight wins at home and 18 consecutive victories on clay.
"The fact that Nadal isn't playing gives us a bit of motivation that maybe we can do it," said Israel's doubles specialist Andy Ram.
"Had he played he would have certainly won both his matches. Nevertheless, every one of their players is better than us on paper.
"We are coming as an underdog and without any pressure. That could be to our advantage and maybe we just might be able to steal an historic victory."
The other semi-final sees eastern European rivals Croatia and the Czech Republic, ranked fifth and seventh respectively by the International Tennis Federation, meet for the first time in the competition.
Croatia have already beaten Chile and the USA and are making their first semi-final appearance since they won the tournament in 2005, while the Czechs haven't made it to the last four since 1996.
The sides face off on clay in Porec, Croatia, with the hosts having won 11 of their last 12 ties on home soil.
"We've chosen clay court to weaken their players and create an advantage for us," said Croatian captain Goran Prpic.
"We will try to seize the opportunity and we are not afraid of responsibility. All four individual matches are open and that is where we are looking for our chance."
The weekend will also see 16 teams go head-to-head for a place in next year's elite World Group, a prerequisite for participation in the Davis Cup proper.
Ukraine and Uzbekistan are both looking to graduate to the World Group for the first time in their history.
Ukraine, who have never reached this stage of the competition before, travel to Belgium, while the Uzbeks face a daunting trip to Belgrade to face Serbia, who lost out to Spain in the first round of this year's tournament.
Elsewhere, nine-time champions France travel to the Netherlands while South Africa take on India in Johannesburg, where both sides will be gunning to return to the World Cup group after an 11-year absence.
Brazil, who have lost at this stage for the last three years in a row, play neighbours Ecuador, while Chile host Austria, Romania travel to Sweden and Italy take on Switzerland in Genoa.
The final of this year's Davis Cup is scheduled to take place on December 4-6. The draw for the 2010 Davis Cup will be made on September 23.

#Nadal blow gives Israel hope of Davis Cup upset
You May Also like: