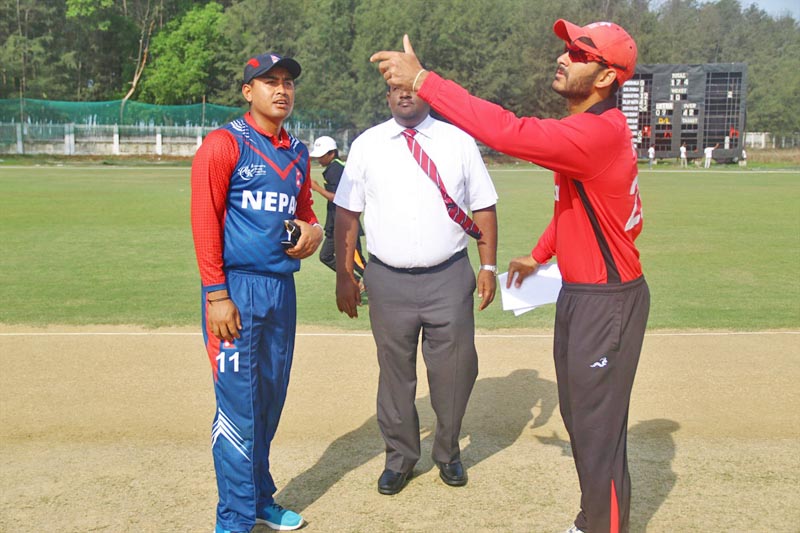 KATHMANDU: Nepal registered a consolation win over Hong Kong by seven wickets during the ongoing ACC Emerging Teams Cup, after Dipendra Singh Airee and Sharad Vesawkar partnered for an unbroken century stand for the fourth wicket.

The match was played at the Sheikh Kamal International Cricket Stadium in Bangladesh on Thursday.

Airee clobbered a six over a bowler's head to long off side's screen as Nepal chased down the target in the 44.2 overs.

Earlier, Nepal had lost both of the matches under the tournament to Pakistan by six wickets and Bangladesh by 83 runs.

Nepal's opening batting, however, still remained a concern as the new combination of Gyanendra Malla and Asif Sheikh failed to yield dividends as Sheikh failed for painstaking eight runs off 23 balls.

Stand-in skipper Gyanendra Malla who failed twice against the pace attacks of Pakistan and Bangladesh resurrected his batting performance with a gritty 70 runs off 83 deliveries. He held the innings together from one end as Nepal lost Sheikh and Dilip Nath in quick succession. Nath contributed 12 runs off 29 balls.

Nizakat Khan chipped in with a wicket.

Despite the win, Nepal bowed out of the tournament from the group stage after losing to Pakistan and Bangladesh.

Earlier, Nepal had won the toss and elected to field first.

KATHMANDU: Nepal have restricted Hong Kong to 214 runs in the first innings of the ACC Emerging Teams Asia Cup being held at the Sheikh Kamal International Cricket Stadium Academy Ground No 2 in Cox Bazaar, Bangladesh on Thursday.

Nepal had a hard time taking the first wicket. Opening batsmen Cameron McAulsen and Anshuman Rath made a sturdy partnership of 95 runs off 127 balls.

Karki bowled Babar Hayat at 34.3 overs and Shahid Wasif at 46.4 overs while Bhari bowled Wajid Shah and Waqas Khan at 41.3 and 41.5 overs respectively.

Earlier, Nepal had won the toss and elected to field first.