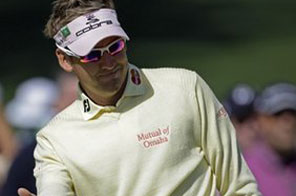 Ian Poulter of England follows his putt on the second green during the second round of the Masters golf tournament in Augusta, Ga., Friday, April 9, 2010. Source: AFP

#Poulter #Westwood lead #but Tiger lurks at Augusta
You May Also like: