Khadka one-shot ahead on Day-I 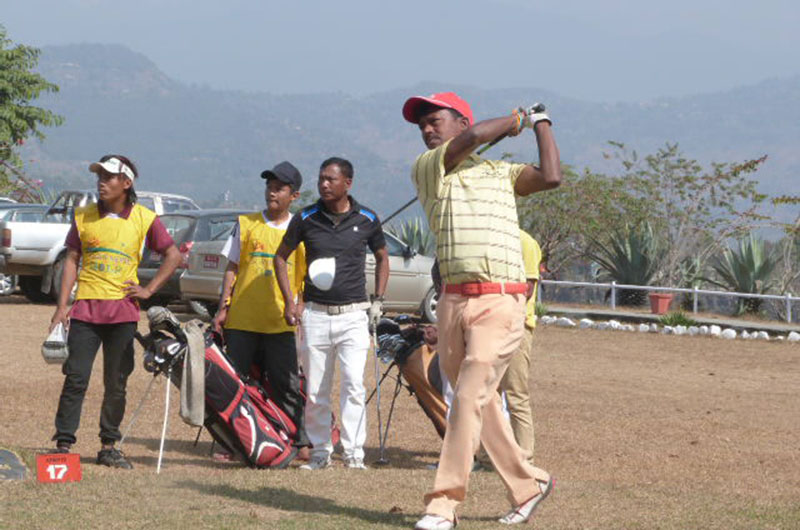 Rabi Khadka tees off for the 17th hole during the first round of the Surya Nepal Western Open in Pokhara on Wednesday, February 8, 2017.

Rabi Khadka carded one-under 69 to take the lead after the first round of the Surya Nepal Western Open here at the Himalayan Golf Course today.

The RNGC pro Khadka carded five birdies including four straight on the back nine to stay ahead of three golfers — Nepal No 1 Shivaram Shrestha, defending champion Dhana Thapa and  Bhuwan Nagarkoti. The trio carded even-par 70 in the third event of the Surya Nepal Golf Tour 2016-17.

Top pro Shrestha, who won the first two events of the season, played two-over 37 on the front nine before carding two-under 33 on the latter half. After facing bogeys on the first, third and sixth holes, Shrestha carded a birdie on the ninth. On the back nine, Shrestha dropped a shot on the 12th and carded birdies on the 15th, 17th and 18th holes.

Defending champion Thapa of Tribhuvan Army Officers Golf Club carded birdies on the sixth and ninth holes to take the turn at two-under 33. On the back nine, Thapa faltered to two-over 37 after faced three straight bogeys from the 12th and added another on the 17th hole against birdies on the 10th and 15th holes.

Gokarna pro Nagarkoti dropped a shot on the fifth hole to play one-over 36 on the front nine. He carded one-under 34 on the latter half that included birdies on the 10th and 17th holes and a bogey on the final hole.

Local pro Bhu Bahadur Gurung was at the fifth position with the score of three-over 73, while Deepak Thapa Magar and Bal Bhadra Rai were tied for sixth along with amateur Kamal Tamang at four-over 74. Likewise, Sanjay Lama was ninth at five-over 75, ahead of amateur Mithun Rai (76).

In amateur section, Kamal Tamang took the lead after he played four-over 74. Mithun Rai was two strokes behind at 76, while Yubraj Bhujel was third at 78. Tamang played four-over 39 on the front nine and added even-par 35 on the back nine, while Rai played 37 and 39 on the two halves.