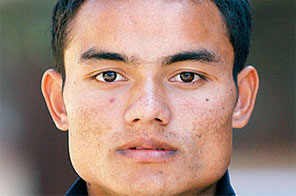 KATHMANDU: Nepali middle distance runner Hari Kumar Rimal qualified for the men’s 1500m final in the 18th Asian Athletics Championships in Guangzhou, China today.
Held at the Guangdong Olympic Stadium, Rimal timed 3:50.76 second to finish seven out of 10 runners in the heats. In making it to the final, Rimal also set a new personal best, breaking his previous mark of 3:55.00 seconds set during the South Asian Games selection tournament. Rimal will compete in the 12-man final on Wednesday.
In his only first international appearance, Rimal is also set to compete in
3000m steeple chase on November 12.
Nepal also participated in three other events today but the athletes failed to qualify, let alone improve their personal best timings. The women’s 400m national record holder Pramila Rijal took 1:00.47 seconds to finish seventh in the heats. Rijal was unable to better her personal best and national record 59.19 which she set during the SA Games selection tournament.
In women’s 100m, Keshari Chaudhary timed 13.68 seconds to finish eighth in the heats.
Keshari has the personal best of 12.60 seconds which she set during the fifth National Games in April.
Meanwhile, men’s 100m runner Tilak Ram Mahato timed 11.52 seconds for the seventh place finish in the heats which was below his personal best timings of 11.08.
Chaudhary will try her luck in triple jump on Wednesday. She has the national record of 11.30 metres set during the fifth National Games. Sprinters Mahato and Rijal will be participating in the 200m on November 12.