LALITPUR, JANUARY 21 Sabitra Bhandari scored a hat-trick as Nepal APF Club thrashed Chandrapur Municipality 6-0 in the Women’s National League here at the ANFA Complex grounds today. The national team striker, who is better known as Samba in sports fraternity, opened the scoring in the 14th minute to put the departmental side ahead. Anjali Yonjan doubled the tally in the 22nd minute to go into the break with a comfortable lead. 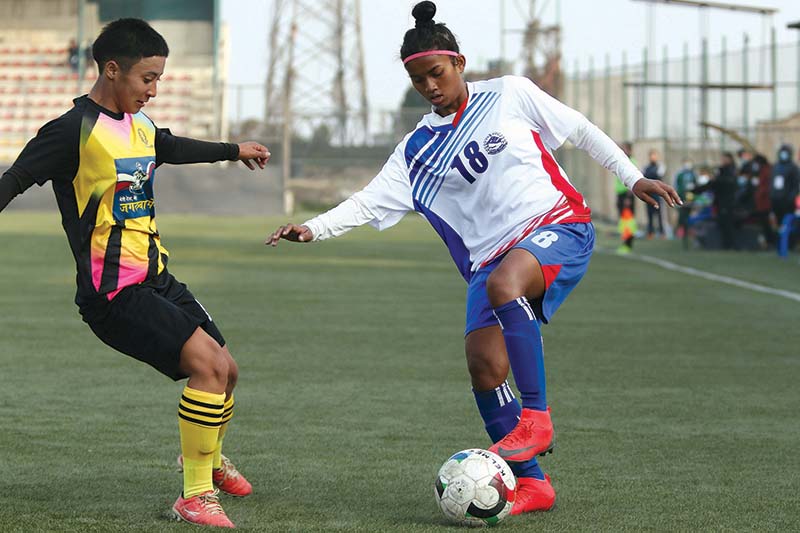 Biratnagar Metropolitan City’s Asha Kumari (right) and Waling Municipality’s Sushma GT vie for the ball during their Women’s National League match at the ANFA Complex grounds in Lalitpur on Thursday, January 21, 2021. Photo: THT
Bhandari made it 3-0 with her second goal in the 62nd minute before Anita Basnet extended the lead two minutes later. Bhandari then completed her hat-trick in the 72nd minute and Preeti Rai completed the rout with the team’s sixth goal in the 89th minute. In another match, Biratnagar Metropolitan City played a 1-1 draw with Waling Municipality. Samjhana Sharma put Waling ahead in the second minute with a header on a corner kick, while Asha Kumari scored the equaliser for Biratnagar in the 68th minute when she converted a free kick from 25 yards out. On Friday, Chaudandigadi Municipality will take on Nepal Police Club. A total of seven teams are taking part in the event which is being played in double leg format for the first time.
#Chandrapur Municipality #Nepal APF Club #APF #ANFA Complex grounds #APF Club #Sabitra Bhandari #Samba #treble #Women’s National League #Chandanpupr Municipality
You May Also like: