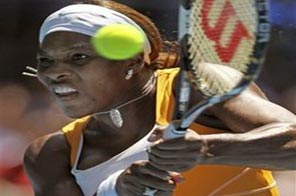 Last year, Suarez Navarro beat Venus Williams in the second round and made it to the quarterfinals.

The Spaniard didn't even get close this time, and the Williams sisters remained on course for a semifinal meeting when Venus held off Australia's Casey Dellacqua 6-1, 7-6 (4), closing with an ace on her third match point.

Serena Williams' only real difficulty was in closing the first set, needing eight set points in a game that went to deuce 13 times and lasted longer than the previous five games combined.

After she missed her seventh set point, pushing a backhand too long, the top-ranked Williams dropped into a sitting position on the court with a look of disbelief.

"It was definitely the toughest 6-love set," she said. "I thought, 'OK, Serena, don't put too much pressure on this. Worst case scenario it will be 5-1.' But way to keep fighting."

Top-ranked Roger Federer had no trouble in a 6-3, 6-4, 6-4 win over No. 31 Albert Montanes of Spain. It was the 28-year-old Swiss star's 50th win at Melbourne, where he has collected three of his record 15 Grand Slam singles titles.

"It was important to come through the first week," Federer said. "I feel good, I feel confident. Physically I'm fine and mentally fresh and that's the way you want to go into the second week."

Nikolay Davydenko, Federer's potential quarterfinal opponent, extended his impressive winning run with a 6-0, 6-3, 6-4 victory over No. 30 Juan Monaco of Argentina.

Davydenko will next face Fernando Verdasco, who lost an epic, five-set semifinal to eventual champion and fellow Spaniard Rafael Nadal last year. Verdasco advanced when Austria's Stefan Koubek retired due to a virus after losing the first set 6-1.

The sixth-seeded Davydenko counts wins against Federer and Nadal at last year's World Tour Final and this season's opening event at Doha among his 12-match winning streak. The 28-year-old Russian has never gone beyond the quarterfinals at the Australian Open.

Novak Djokovic, who beat Federer in the semifinals en route to the 2008 title, had a 6-1, 6-1, 6-2 win over Denis Istomin of Uzbekistan. The 22-year-old Serb will play Poland's Lukasz Kubot, who had a walkover when No. 20 Mikhail Youzhny withdrew from their scheduled third-round match due to right wrist pain.

Serena Williams, who has won the Australian title each odd-numbered year since beating Venus in the 2003 final, will play No. 13 and local hope Sam Stosur, a 6-4, 6-1 winner over Italian Alberta Brianti.

No. 7 Victoria Azarenka of Belarus had a 6-0, 6-2 win over Italy's Tathiana Garbin to set up a fourth-round match against No. 9 Vera Zvonareva of Russia, who beat Argentina's Gisela Dulko 6-1, 7-5.

China's Li Na matched her best run at Melbourne Park when she advanced 7-5, 3-6, 6-2 over 2008 semifinalist Daniela Hantuchova. Li is only one win away from reaching the quarterfinals at a third major.

Kim Clijsters came to the Australian Open as an inspiration to her countrywomen and mothers everywhere after her unexpected U.S. Open victory.

Any chance of back-to-back major titles ended in 52 minutes Friday evening in a 6-0, 6-1 third-round loss to 19th-seeded Nadia Petrova. Also lost was the chance of a quarterfinal against fellow Belgian Justine Henin, a former No. 1 playing her first major in two years.

"I was completely off," Clijsters said. "I think tennis-wise, I didn't feel the ball at all."

Defending champion Nadal also was upset with his game, although he had a victory to show for it — a 6-4, 6-2, 2-6, 7-5 decision over Germany's Philipp Kohlscreiber at night.

"In the third, I started terrible, no?" the Spaniard said. "Everybody has not very good days."

Juan Martin del Potro, who had a surprise win over Federer in the U.S. Open final last September, advanced Friday night along with No. 5 Andy Murray, Americans John Isner and Andy Roddick and Fernando Gonzalez of Chile.

But Murray has to first get past Isner, a 6-foot-9 American who won his first title last week in Auckland.

No. 2 Dinara Safina and No. 3 Svetlana Kuznetsova went through and will be part of two all-Russian women's matches in the last 16. Belgians Henin and Yanina Wickmayer will vie for a place in the quarterfinals.

Former No. 1-ranked Henin, who was inspired to come back to the tour after watching Clijsters and her toddler daughter, Jada, celebrating the championship at Flushing Meadows last September, found a way forward after recovering from a set and a break down to beat Alisa Kleybanova 3-6, 6-4, 6-2.

#Serena Williams #Federer reach 4th round
You May Also like: