US facing Argentina, Messi in Copa semis not overwhelming 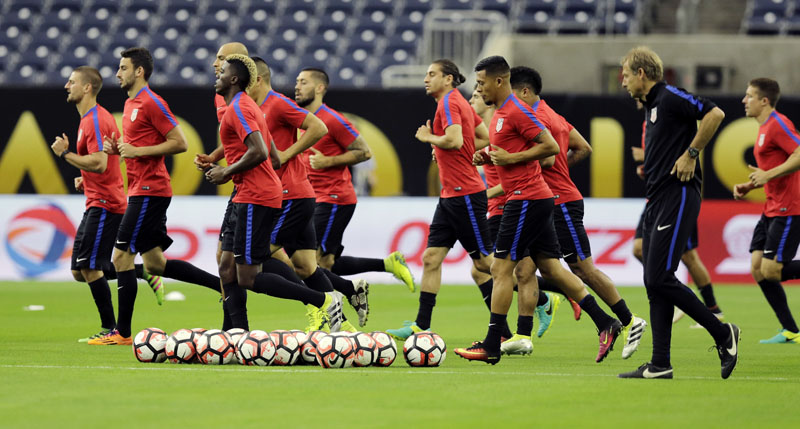 US players go through drills during a Copa America Centenario soccer training session on Monday, June 20, 2016, in Houston, for a Tuesday semifinal against Argentina. Photo: AP
HOUSTON: American players maintained over and over that playing Argentina and Lionel Messi in a Copa America semifinal on Tuesday night was a big deal, yet not mind-boggling. Top-ranked Argentina is a two-time World Cup champion and Messi is the only five-time FIFA Player of the Year. While no longer a soccerneophyte, the United States knows it remains a distance from the top tier. "There's a bunch of very good players on their team. We have a few good players, as well," US captain Michael Bradley said Monday. "Sure, on paper they're the team that everybody thinks is going to win. No problem. But ultimately when that whistle blows it's still 90 minutes of competition."

US players go through drills during a Copa America Centenario soccer training session on Monday, June 20, 2016, in Houston, for a Tuesday semifinal against Argentina. Photo: AP
After winning its group, the US beat Ecuador 2-1 to reach a semifinal outside its region for the first time since 2009, when it upset Spain 2-0 in the Confederations Cup semis before wasting a two-goal lead in the final and losing to Brazil 3-2. It's not the World Cup, but reaching the final of this expanded 100th anniversary Copa America would be a major achievement for a 31st-ranked US team questioned by its growing fan base after it failed to win last year's CONCACAF Gold Cup. "We want to take the game to them, as well. We want to keep a high line. We want to go eye to eye," U.S. coach Jurgen Klinsmann said. "In order to grow, you need to go through some pain and you need to try things out. You need to risk. And when you risk things, here and there you get a lesson." While the US is now alongside Mexico as a power in North and Central America and the Caribbean, qualifying for seven straight World Cups, it is 12-43-15 in games against former World Cup champions, including 3-18-1 competitive matches. It is in the Copa America semifinals for the first time since 1995. "We were nobody in the world. We started in the '90s and we had to inch our way up," retired defender Marcelo Balboa said. "Back then, we changed our game plan to play against teams. Now they stick to their game plans, but they're aware of the two or three threats that can do some damage." And there's no bigger threat than Messi, who has four Champions League and eight La Liga titles with Barcelona but who has not won any championships with Argentina's senior team, which is seeking its first major trophy since 1993. Messi, who turns 29 on Friday, is nicknamed "La Pulga" for his speed and unmatched dribbling ability. He wanders from midfield to the front line, drifts from the left flank to the right and often cuts from the right to the center. He has not scored in three previous matches against the US. "You say you want to get pressure on Messi and not let him have time on the ball. How do you do that?" US defender Matt Besler said. "Even when guys step up to him and are right on him, he finds a way to wiggle out of something, and then he's able to get his head up and play in some of those balls that he's played in this tournament. And so it's a huge challenge, probably the biggest challenge for us as a defensive unit." Klinsmann will be forced to make changes because of suspensions to midfielders Jermaine Jones and Alejandro Bedoya, and forward Bobby Wood. Kyle Beckerman appears likely to replace Jones, with Graham Zusi, Chris Wondolowski, Darlington Nagbe and 17-year-old Christian Pulisic the top candidates for the other two slots. Right back DeAndre Yedlin returns from his one-game suspension. "Make it your moment," Klinsmann recalled telling his players. "It's about confidence, about hunger, about the willingness to suffer." A sellout crowd of 70,000-plus is expected at NRG Stadium. Argentina will have just two days' rest after beating Venezuela 4-1, while the U.S. will have four. "Playing in Houston, there will be a lot of Mexicans, and maybe Mexicans will make us feel more local," Argentina coach Gerardo Martino said through a translator. The winner advances to Sunday's final in New Jersey against Chile or Colombia, who play Wednesday in Chicago. "You don't look at how you're viewed or who you're playing against." said US forward Clint Dempsey, whose three goals are one behind Messi and Chile's Eduardo Vargas, the tournament's co-leaders. "Hopefully we can keep dreaming and keep going forward."
#US #Lionel Messi #Argentina #Copa America Centenario soccer
You May Also like: