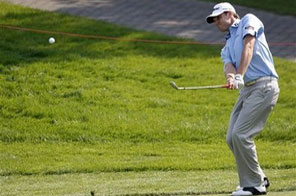 Nick Watney of the U.S. hits the ball at 15th green during the first round of the HSBC Champions golf tournament at Shanghai Sheshan International Golf Club Thursday, Nov. 5, 2009 in Shanghai, China. Watney finished the fist day with score of 8 under as the leader. Source: AP

SHANGHAI: Nick Watney has tied the course record at Sheshan International with an 8-under 64 to take the early lead in the HSBC Champions and give himself another chance at winning a World Golf Championship.
In his first trip to China, the 28-year-old American ran off four straight birdies in the middle of his round Thursday and was building a big lead until he settled into pars and made a lone bogey on his final hole with a three-putt from the fringe.
Ryan Moore and Martin Kaymer of Germany shot 66s, and Tiger Woods opened with a 67.
Watney, runner-up to Phil Mickelson in the WGC event at Doral, is making the first of two trips to China. He returns at the end of the month to play in the World Cup.
Mickelson shot a 69.

#Watney shoots 64 to take lead in China
You May Also like: