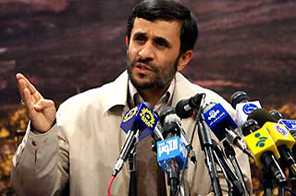 TEHRAN: Iranian President Mahmoud Ahmadinejad said the Holocaust was a "myth" as he addressed the annual Quds Day rally in Tehran on Friday, reiterating comments that sparked outrage around the world.

"The very existence of this regime is an insult to the dignity of the people," the hardline Ahmadinejad said of Iran's arch-foe Israel.

"They (Western powers) launched the myth of the Holocaust. They lied, they put on a show and then they support the Jews.

"If as you claim the Holocaust is true, why can a study not be allowed?" he said to chants of "Death to Israel" from the crowd gathered for the annual display of solidarity with the Palestinians.

"The pretext for establishing the Zionist regime is a lie... a lie which relies on an unreliable claim, a mythical claim, and the occupation of Palestine has nothing to do with the Holocaust," he added.

"This claim is corrupt and the pretext is corrupt. This (the Israeli) regime's days are numbered and it is on its way to collapse. This regime is dying."

"Regardless that we've heard that type of rhetoric before, obviously we condemn what he said, and I would point to what the president (Barack Obama) said in Cairo: denying the Holocaust is baseless, ignorant and hateful," White House spokesman Robert Gibbs said.

"Promoting those vicious lies serves only to isolate Iran further from the world."

British Foreign Secretary David Miliband branded Ahmadinejad's comments "abhorrent as well as ignorant," and said they were "not worthy of the leader of Iran."

"The coincidence of today's comments with the start of Jewish New Year only adds to the insult," he added.

In Berlin German Foreign Minister Frank-Walter Steinmeier said Ahmadinejad's remarks shamed Iran. "With his intolerable tirades, he shames his country," and his "anti-semitism... must be collectively condemned," he said.

Similar comments by Ahmadinejad shortly after his first election as president in 2005 also sparked an international outcry.

Then he said Israel was "doomed to be wiped off the map."