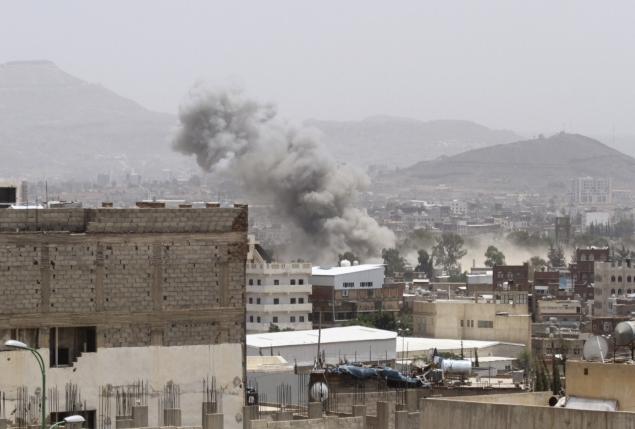 Dust rises from the site of a Saudi-led air strike in Yemen's capital Sanaa July 10, 2015. REUTERS
SANAA/ADEN: Saudi-led air strikes and heavy shelling between warring factions shook several cities in Yemen on Saturday, residents said, violating a United Nations humanitarian truce which took effect just before midnight. The UN-brokered pause in the fighting was meant to last a week to allow aid deliveries to the country's 21 million people who have endured more than three months of bombing and civil war. A coalition of Arab states has been bombing the Iranian-allied Houthi rebel movement - Yemen's dominant force - since late March in a bid to restore to power President Abd-Rabbu Mansour Hadi, who has fled to Riyadh. That coalition said on Saturday that the Yemeni government in exile had not asked it to pause, according to a news flash on Saudi-owned Arabiya TV. Yemeni government officials were not immediately available to comment, but the UN Secretary General's office said before the truce that President Hadi had "communicated his acceptance of the pause to the coalition to ensure their support." Air raids pounded Houthi and Yemeni army units in the capital Sanaa and in the group's stronghold province of Saada along the border with Saudi Arabia. Fighting raged in the embattled southern city of Taiz and the eastern province of Mareb amid intense artillery exchanges between Houthi fighters and local militiamen backed up by Arab air strikes. In Aden, one of the country's most deprived and war-torn areas, witnesses said Houthi forces fired mortars and Katyusha rockets towards opposition fighters based in northern areas and around the city's international airport. Bombing by the Arab alliance and fighting have killed more than 3,000 people since March 26. "TRAGIC" The Houthis, who hail from the Shi'ite Muslim sect, and their army allies say their spread throughout the country is part of a revolution against a corrupt government and hardline Sunni Muslim militants which they say are allied to the opposition forces, and they vowed to keep up the fight despite the truce. "Our security and armed forces maintain their right to fight and hunt down al Qaeda and Islamic State elements as part of our just defence of our people," Colonel Sharaf Luqman, spokesperson for the Houthi-allied army, said in a statement on Saturday. Supplies of food, fuel and medicine have dwindled dangerously because of the fighting and a near-blockade by the coalition, spreading disease and hunger. "There have been very heavy air strikes and fighting across the country, seemingly unabated," UNICEF's Yemen representative Julien Harneis said. But while the fighting mostly doesn't stop humanitarian aid being delivered to affected areas, the tragic thing is that it does impede the civilian population from going the last mile and being able to reach that assistance," he added. Local officials in Aden said that Houthi fighters had allowed 25 trucks of medical aid into the besieged city on Saturday, but were holding up 40 other trucks full of food. All parties in Yemen's conflict had welcomed the announcement of the truce and called for it to be extended. But the exiled government wants the Houthis to release prisoners and give up land they have seized in battle, while the Houthis say they doubt any calm will last. Residents in the eastern city of Mukalla said a suspected US drone fired two missiles at cars carrying al Qaeda militants on Friday night, killing three including a senior leader in the group, Abu Hajar al-Hadrami. Washington fears turmoil in Yemen will strengthen al Qaeda in the Arabian Peninsula (AQAP), the deadliest branch of the global militant group. AQAP's new leader Qassim al-Raymi, appointed after his predecessor was killed in a US drone strike last month, called for attacks on the United States in a taped speech released on Thursday.
#air strike #bombing #heavy fighting #Yemen truce #US drone attack
You May Also like: