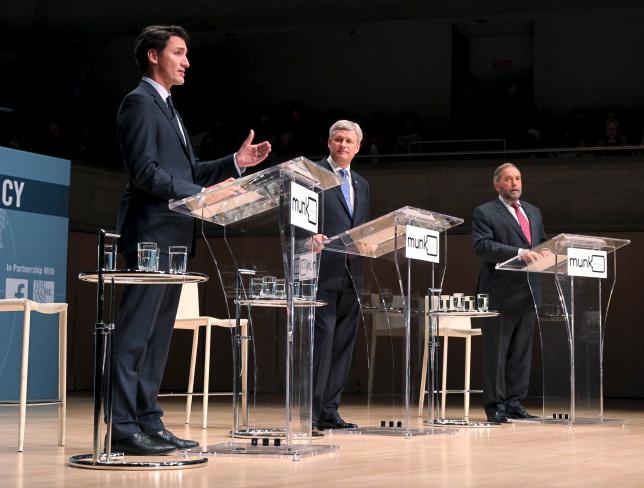 Liberal leader Justin Trudeau (L-R), Conservative leader and Prime Minister Stephen Harper and New Democratic Party (NDP) leader Thomas Mulcair are pictured during the Munk leaders' debate on Canada's foreign policy in Toronto, Canada September 28, 2015. Canadians go to the polls in a federal election on October 19, 2015. REUTERS
OTTAWA: Canadian opposition leaders criticised Prime Minister Stephen Harper on Monday, saying he had betrayed the nation's reputation abroad by abandoning its commitment to multilateralism and helping those in trouble. Justin Trudeau of the Liberals and Thomas Mulcair of the New Democrats - in a tight race with Harper's Conservatives ahead of an Oct. 19 election - said during a televised debate that Harper needed to take in many more refugees fleeing Syria. Canada has said it would accept 23,000 Iraqi refugees and 11,300 Syrians but has been criticized for only resettling 2,300 Syrians to date. Harper brushed aside calls for many more refugees to be allowed in quickly, saying they need to be carefully screened to ensure they do not pose a security threat. "The entire world is looking at Canada and saying 'What is going on? You used to be a country that welcomed human beings, that appreciated diversity'," Trudeau said. "That's what we were as a nation, and yet now Mr. Harper talks about nothing but security," he said to loud applause from the Toronto audience. Harper said Canada was speeding up the process to take in those it has committed to accepting. "We're living in an era where people are fleeing a terrorist war zone, and we obviously must have security screening," he said. The Conservatives say they have taken the moral high ground in their nine years in power, shunning messy diplomatic compromises while resolutely backing allies such as Israel and Ukraine. But many diplomats and Canadian experts say Ottawa has marginalized itself by a combination of extreme positions and miscalculations. Shifting Canada's focus from peace-keeping to the military, Harper sent troops to Afghanistan and signed up for the mission against Islamic State, commitments warmly welcomed by allies such as Britain and the United States. Canadian jets are bombing Islamic State targets and training Iraqi troops. The Liberals would bring home the warplanes while the New Democrats would scrap the entire mission, which was not sanctioned by the United Nations. "Mr. Harper always takes the same approach ... when your only tool is a hammer, all problems resemble nails," said Mulcair. Since taking office in 2006, Harper has distanced Canada from the United Nations, once the centrepiece of its diplomacy. Under Harper, trade ties have also been uneven. His cool relationship with President Barack Obama and US Ambassador to Canada Bruce Heyman have not helped Ottawa's attempts to persuade Washington to approve the Keystone XL pipeline, which would take Alberta oil to US refineries.
#Canada #Prime Minister Stephen Harper #Iraqi refugees
You May Also like: