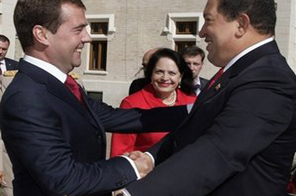 BARVIKHA: Venezuelan President Hugo Chavez on Thursday said his country has recognized the independence of Georgian separatist regions South Ossetia and Abkhazia in a boost to Russia, which had been almost alone in recognizing them.

Russia recognized the two regions as independent shortly after driving Georgian forces out of them in last year's war. But only Nicaragua had followed suit, a tacit slap by the international community and an embarrassment to Moscow's contentions that it was bringing stability to the regions rather than occupying them.

"We will soon begin actions to establish diplomatic relations with these countries," Chavez said at the opening of a meeting with President Dmitry Medvedev at his residence outside Moscow.

Russia now has thousands of troops stationed in each of the regions. Chavez's announcement reflects the growing close relations between the two countries, which Russia has cultivated to expand its global clout and counter U.S. influence in Latin America.

Chavez was expected to discuss possible weapons and energy deals in the meeting with Medvedev and later with Prime Minister Vladimir Putin.

Medvedev thanked Chavez for the announcement, saying "Russia has always had a simple position — we think that it is a country's sovereign right whether to recognize or not recognize new subjects of international law. But of course we are not indifferent to the fate of these two states."

"Recognition of the separatist regimes of Abkhazia and South Ossetia is a crystallization process and separates normal countries and renegade countries into different sides," said Georgian Cabinet minister Temur Yakobashvili, the government's point man on the regions.

Abkhazia and South Ossetia broke off from Georgia in wars in the mid-1990s, but Georgia had peacekeeping troops in parts of South Ossetia and held a small section of Abkhazia.

Those forces were driven out last year in a five-day war. Russia says the war started with a fierce Georgian artillery assault on South Ossetia's capital, while Georgia maintains it launched the assault to try to deter a huge Russian military incursion into the region.