China to respond firmly to any North Korea nuke test 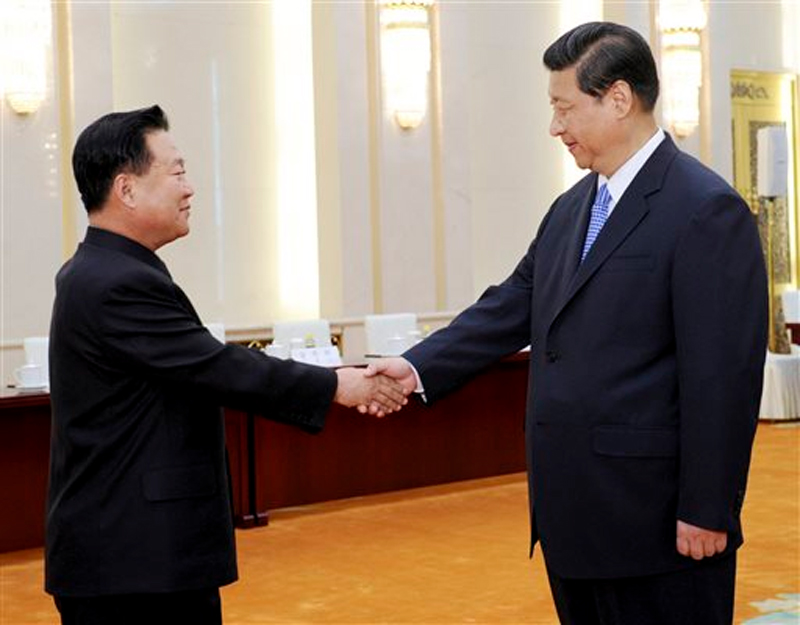 North Korean Vice Marshal Choe Ryong Hae, left, is greeted by Chinese President Xi Jinping on May 24, 2013. Photo: AP
BEIJING: If North Korea launches a rocket into space or conducts a nuclear test in the coming weeks, as observers suspect it may, China is certain to respond angrily, and perhaps with an unprecedented level of economic punishment. The question is whether North Korea can be swayed even by its most important ally. China, which fought on North Korea's side in the 1950-53 Korean War and remains its biggest trading partner and source of assistance, is thought to have the most leverage of any nation over Kim Jong Un's authoritarian country. Yet the degree of that influence has long been questioned, particularly over the almost four years since Kim took power following the death of his father, Kim Jong Il, who visited China repeatedly and maintained close ties with Beijing. Kim the younger has yet to make a trip to China or receive any high-ranking Chinese officials in Pyongyang. He snubbed a prestigious military parade in Beijing earlier this month by instead sending an envoy, secretary of the ruling Korean Workers Party Choe Ryong Hae. Now, North Korean officials have signaled that they could mark the 70th anniversary of the founding of its ruling Workers Party on Oct. 10 with a satellite launch, and announced a restart of atomic-fuel plants that prompted speculation that it is preparing for its fourth nuclear test explosion. Either a nuclear test or a satellite launch would violate UN resolutions, the latter because the rocket technology needed can also be used to develop long-range missiles. China's response to North Korea's last declared nuclear test, in the spring of 2013, was considered something of a watershed in degree of harshness. China swiftly joined the international community in condemning the action, called in the North Korean ambassador to protest, and, according to some indications, slowed the flow of goods across their border. A new nuclear test or rocket firing could lead China to enforce existing and future sanctions more vigorously. "China will strongly oppose (a test or launch) and will be sure to implement future United Nations resolutions even more resolutely," said Zhang Liangui, a North Korea expert with the ruling Communist Party's main research and training institute in Beijing. China may also take unilateral steps such as cutting back on cross-border trade, Chinese experts say. Such measures could target the industrial commodities and luxury goods Kim needs to keep the moribund North Korean economy ticking over and ensure the loyalty of regime supporters. Information about North Korea's trade relations is difficult to access, though South Korea estimates its rival's total trade rose slightly to $7.61 billion last year, of which China-North Korean trade accounted for as much as $6.8 billion. Beijing might also consider beefing up its forces along its 1,420-kilometer (880-mile) border with the North, as it was rumored to have done last month during a confrontation between North Korean and South Korean forces. A test would inflict considerable collateral costs on the already strained China-North Korean relationship, both between their governments and among the Chinese public, where opinion has been increasingly running against North Korea. "Most importantly, relations between the two parties and people will be greatly harmed if North Korea insists on acting while being clearly aware of China's stance," said Lu Chao, an expert on the North at the Academy of Social Sciences in Liaoning province bordering North Korea. Such a development, Lu said, will leave North Korea "even more isolated on the international stage," with Beijing less willing to speak up for its ally at forums such as the UN, where last year it sought to suppress discussion of a report about human rights violations in the North. Yet, China remains unwilling to take measures that might pose an existential threat to the regime, even as it pushes North Korea harder to end its nuclear provocations and reform its broken-down economy. Along with their historical ties, Beijing continues to see North Korea as a crucial buffer against US troops based in South Korea and Japan. It also deeply fears that a regime collapse could send swarms of refugees across its border. For that reason, Beijing probably won't greatly curtail assistance in food and other daily necessities, including fuel oil, although there are indications that some of that aid may have already been cut back, said Jingdong Yuan, a specialist on Asia-Pacific security at Australia's University of Sydney. "It's hard to anticipate drastic policy changes such as a complete cutoff of aid because limiting the impacts of uncertain developments in North Korea remains a key consideration for Beijing," Yuan said. Given North Korea's intensely opaque leadership, experts say it's extremely difficult to judge what effect China's existing statements, adherence to UN sanctions and unilateral measures may have on the regime. Most, however, believe their value is limited. "The general conclusion is that Beijing's impact on the nuclear development has been moderate to negligible. The horse is already out of the barn, so to speak," Yuan said. North Korea's leaders may also have concluded that their regime is secure enough to withstand tougher action from Beijing, Zhang said. "It's obvious that sanctions haven't affected the lives and decision-making of their leaders. They think that not even a tough stance from China can affect their system's stability, so they just don't care," Zhang said. Still, Beijing may be hoping to at least give North Korea's government pause. "When considering the pros and cons, especially with the danger of further economic sanctions from China, the regime may just think twice before acting," Lu said.
#China #North Korea #North Korea nuke test #United Nations resolutions #South Korean forces #North Korea's government
You May Also like: