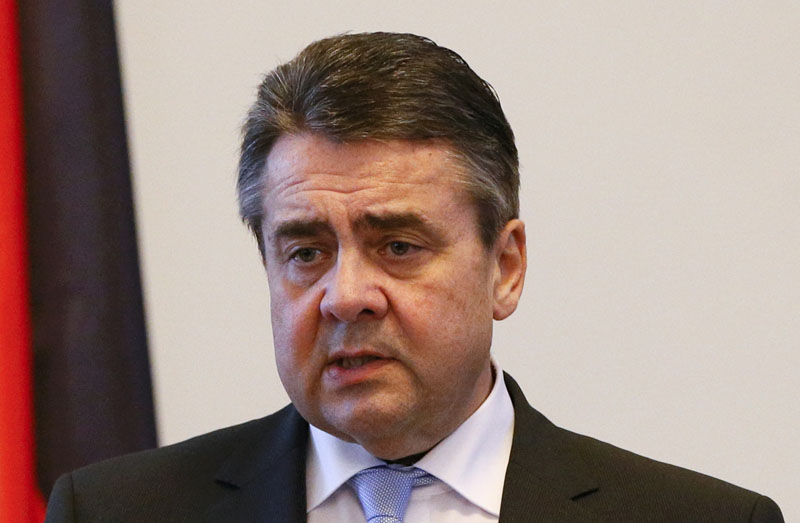 German Foreign Minister Sigmar Gabriel speaks during a news briefing after a meeting with his Ukrainian counterpart Pavlo Klimkin in Kiev, Ukraine, on March 2, 2017. Photo: Reuters
BERLIN: A decision by Russia to permanently station Iskander missiles in Kaliningrad, its enclave on the Baltic Sea, would mark a setback for European security, German Foreign Minister Sigmar Gabriel told Russian news agency Interfax on Wednesday. Russia said in October it had moved the ballistic nuclear-capable missiles to Kaliningrad and deployed a S-400 air missile defence system there. It said the deployment was part of routine drills, but Western military officials worry that it may become permanent. "If Iskander missiles were stationed in Kaliningrad permanently, that would be a cause for great concern and a blow to European security," Gabriel said. "That is why we are watching what's happening in Kaliningrad very carefully." Gabriel traveled to Moscow late on Wednesday after a meeting with his Polish counterpart in Warsaw. Some modifications of the Iskander-M missiles can hit targets 700 km (450 miles) away, putting the German capital of Berlin within range of Kaliningrad. Lithuania, which borders Kaliningrad, in January said it planned to build a two-metre-high wire fence along its border, underscoring its concerns about a more assertive Russia. Gabriel visited Lithuania last week, vowing to keep German troops in the region for as long as need. In the Interfax interview, Gabriel rejected Russian criticism of NATO's deployment of 4,000 troops to Poland and the Baltic states, including 400 German soldiers in Lithuania. "Germany and other NATO states were not the first to go into the Baltic area," he said, adding that the number of German troops in the region was miniscule compared with a massive Russian buildup.
#Sigmar Gabriel #Interfax #Baltic Sea #Kaliningrad #Iskander missiles #Germany-Russia relations
You May Also like: