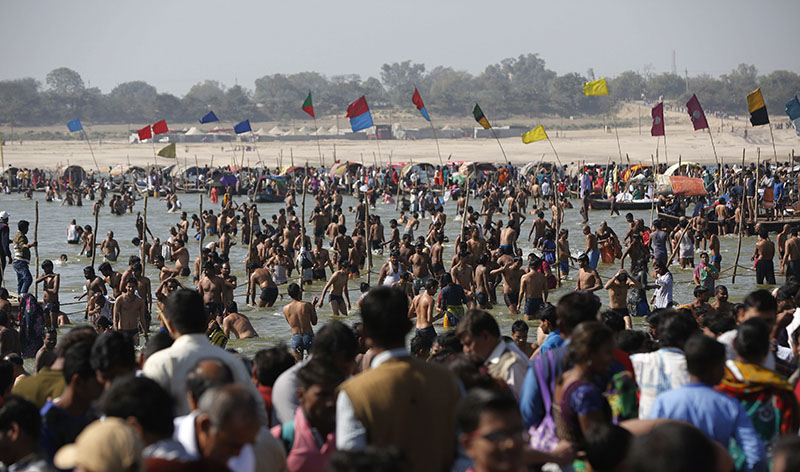 Hindu devotees crowd to take ritualistic dip at the Sangam, the confluence of the rivers Ganges, Yamuna and the mythical Saraswati, on the occasion of Hindu festival of Shivaratri, that marked the last day of the annual traditional fair of Magh Mela, in Allahabad, India, on Friday, Feb. 24, 2017. Photo: AP
NEW DELHI: A court in the northern Indian state of Uttarakhand has granted the same legal rights as a human to the Ganges and Yamuna rivers, considered sacred by nearly a billion Indians. The Uttarakhand High Court ruled Monday that the two rivers be accorded the status of living human entities, meaning that if anyone harms or pollutes the rivers, the law would view it as no different from harming a person. The judges cited the example of New Zealand's Whanganui River, revered by the indigenous Maori people, which was declared a living entity with full legal rights by the New Zealand government last week. The court in the Himalayan hill-resort town of Nainital appointed three officials to act as legal custodians responsible for conserving and protecting the rivers and their tributaries. Judges Rajeev Sharma and Alok Singh said the Ganges and Yamuna rivers and their tributaries be declared "legal and living entities having the status of a legal person with all corresponding rights, duties and liabilities." The case came up in court after officials complained that the governments of Uttarakhand and neighboring Uttar Pradesh states were not cooperating with federal government efforts to set up a panel to protect the Ganges. The court ordered that the Ganga Management Board be set up and begin working within three months. Environment activists say many rivers across India have become dirtier as the country's economy develops, with city sewage, farming pesticides and industrial effluents freely flowing into waterways despite laws against polluting. The Yamuna is the main tributary of the Ganges River that officials say is tainted with sewage and industrial pollution. In some places, the river has stagnated to the point that it no longer supports fish or other forms of aquatic life. Water from the Yamuna is chemically treated before being supplied to Delhi's nearly 19 million residents as drinking water.
#India #Uttarakhand #Ganges #Living Rivers #Yamuna #Uttarakhand High Court #New Zealand's Whanganui River #indigenous Maori #Ganga Management Board #Judges Rajeev Sharma and Alok Singh
You May Also like: