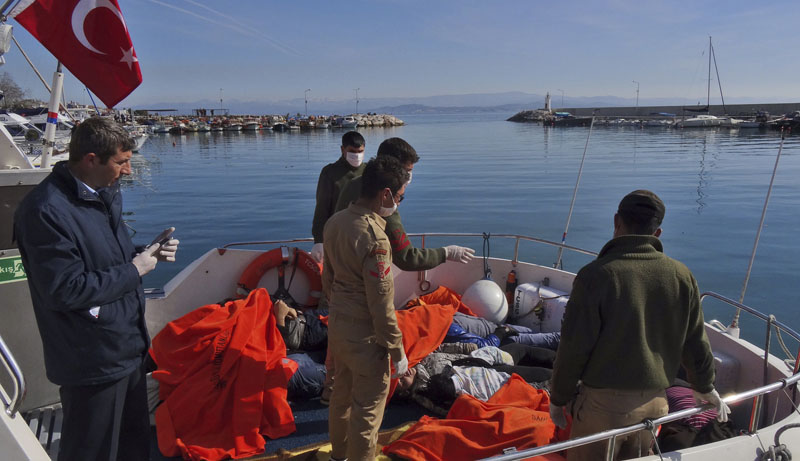 Members of Turkish forces look at the bodies of some of the migrants that were drowned as they were trying to reach Greece, at a port in the coastal town of Dikili, near Izmir, Turkey, on Monday, February 8, 2016. Photo: AP
GENEVA: The International Organisation for Migration says 409 people have died this year trying to cross the Mediterranean Sea, and migrant crossings in the first six weeks of 2016 are running at nearly ten times the rate of the same period last year. IOM says 76,000 people have reached Europe by sea, nearly 2,000 per day, since January 1. More than three-fourths of the deaths have been on the short eastern Mediterranean route between Turkey and Greece — which traditionally has seen far fewer deaths than the much longer central Mediterranean route between Libya and Italy. The IOM statement Tuesday comes a day after Turkey's coast guard said 27 migrants had died after their boat capsized in the Bay of Edremit while trying to reach the Greek island of Lesbos.
#migrants #Mediterranean Sea #Europe #migrants died #The International Organisation for Migration (IOM)
You May Also like: