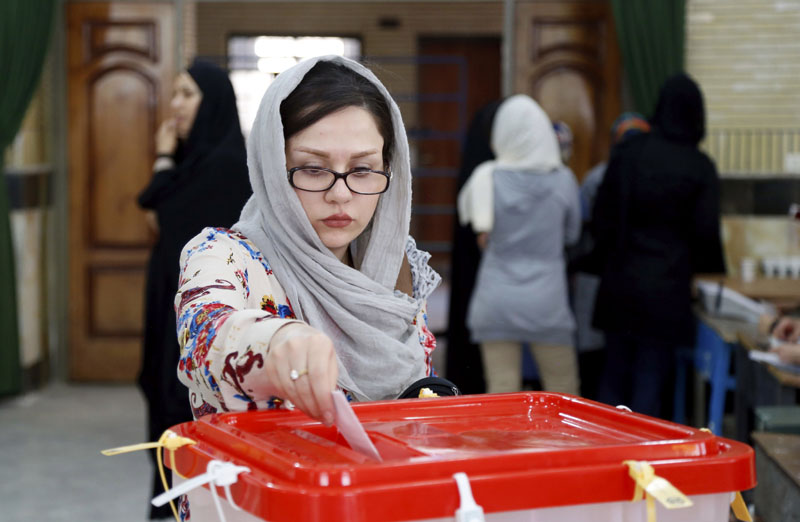 An Iranian woman casts her ballot for the parliamentary runoff elections in a polling station at the city of Qods about 12 miles (20 kilometres) west of the capital Tehran, Iran, Friday, April 29, 2016. Photo: AP
The bloc, which supports President Hassan Rouhani and a nuclear deal the country reached with world powers last summer, will have to dominate the remaining unannounced runoff seats in order to secure an outright majority in the 290-seat legislature. State TV on Saturday morning announced winners for 60 of the remaining 68 seats being contested. Among them there are 32 moderate-reformist candidates, with the rest divided between hard-liners and independent candidates. Final results are expected later on Saturday. So far the moderate-reformist bloc has secured the largest faction in the 290-seat parliament with at least 130 seats, followed by hard-liners with less than 90 seats and independents with some 60 seats. The moderate-reformist bloc chief and leading candidate in Tehran, Mohammad Reza Aref, said earlier in April they needed 40 seats in the runoff to secure a pure mathematical majority. If they fail to achieve the majority, the bloc will have to turn to some of the independent parliamentarians in order to push through legislation. The stances of these independent MPs tend to vary from issue to issue. Failure to achieve that majority could also complicate the bloc's efforts to name the parliament speaker of their choosing. The speaker usually plays a significant role in passing or rejecting bills and also serves on several important decision-making bodies including the powerful Supreme National Security Council. In February, the moderate-reformist bloc dominated the vote in Tehran, securing all 30 seats there. But their support is less dominant outside the capital. Deputy Interior Minister Hossein Ali Amiri told state TV that turnout in the runoff elections was 59 percent, compared with 62 percent in the original February elections. Some 17 million Iranians were eligible to vote.
#Iran #Iranian President Hassan Rouhani #parliamentary runoff elections #moderate-reformist bloc #Deputy Interior Minister Hossein Ali Amiri #Iran election
You May Also like: