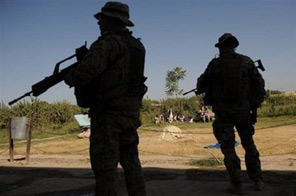 German soldiers stand guard in the northern Afghan city of Kunduz. A New York Times journalist kidnapped in Kunduz has been freed during a special forces operation but his Afghan colleague was killed by the Taliban, an Afghan official said Wednesday. Source: AFP

KABUL: A New York Times journalist kidnapped in Afghanistan has been freed during a special forces operation but his Afghan colleague was killed by the Taliban, an Afghan official said Wednesday.

Stephen Farrell, who is Irish, and his colleague Sultan Mohammad went missing on Saturday in the northern province of Kunduz, where a NATO air strike killed civilians and dozens of Taliban insurgents.

"Last night in a US special forces operation in Chardara district, they managed to free Stephen Farrell but the Afghan journalist Sultan Mohammad was killed by Taliban during the operation," said Kunduz governor Mohammad Omar.

The New York Times website reported on its website that "commandos free Times reporter from captors in Afghanistan" but provided no immediate details.

Abdul Razaq Yaqubi, the provincial police chief, said he heard the information and was sending a team to the area to find out what happened.

Farrell was the second foreign correspondent working for the New York Times to be kidnapped in Afghanistan in less than a year.

David Rohde and a local reporter were abducted outside Kabul with their driver last November, but escaped in June, the newspaper reported.

Farrell is an experienced reporter who has also worked for the New York Times during the war in Iraq and was formerly Middle East correspondent for Britain's The Times newspaper.

There was no immediate comment from foreign militaries based in Afghanistan, where more than 100,000 troops serve under a US-led and separate NATO-led coalition in a bid to defeat a raging Taliban insurgency.

Recent weeks have been bloody for journalists covering the conflict in Afghanistan, where a Taliban insurgency is now at its most virulent in the eight years since the 2001 US-led invasion ousted their extremist regime.

In August, three journalists working for US-based media were wounded in roadside bomb blasts in the country -- a correspondent with CBS Radio News, and a photographer and videographer working for the Associated Press.

#Kidnapped NY Times journalist freed: official
You May Also like: