No black box signals from F447 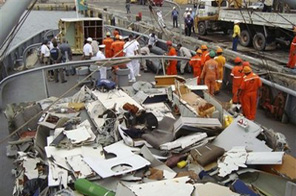 In this photo released by Brazil's Navy, pieces of debris of the Air France Flight 447 are seen on the Brazil's navy ship Caboclo, at the port of Recife, Brazil, Friday, June 19, 2009. Source: AP

PARIS: French military ships searching for the black boxes of Flight 447 have detected sounds in the Atlantic depths but they are not from the Air France plane's flight recorders, a French official said Tuesday.
The official and French investigators denied a report on the website of the French newspaper Le Monde that French ships had picked up a signal from the black boxes.
French military ships searching in the area where the plane crashed have "heard sounds" but "the black boxes have not been detected," said an aide to France's minister in charge of transport, Jean-Louis-Borloo. The aide spoke on condition of anonymity because she was not authorized to be publicly named.
The two recorders, key to helping determine what happened to the Air France plane that plunged into the ocean May 31, will only continue to emit signals for another eight days or so.
The Airbus A330 plane fell into the Atlantic after running into thunderstorms en route from Rio de Janeiro to Paris. All 228 people aboard were killed. The cause of the crash remains unclear.
The French air accident investigation agency, BEA, said in a statement Tuesday that "no signals transmitted by the flight recorders' locator beacons have been validated up to now."
The BEA said work is continuing "aimed at eliminating any doubts related to any sounds that may be heard, and any findings will be made public."
Last week, BEA director Paul-Louis Arslanian sternly warned against any unconfirmed leaks in the investigation, saying they could mislead the public and unnecessarily worry or encourage the families.
Le Monde said a mini research submarine, the Nautile, dived Monday to search for the boxes based on a "very weak signal" from the flight recorders picked up by the French ships.
French military spokesman Christophe Prazuck said he could not confirm or deny the Le Monde report. French air accident investigators and officials with the French marine institute that operates the mini-sub, Ifremer, could not immediately be reached for comment.
Brazilian and American officials said that as of Sunday evening no signals from the black boxes had been picked up.
Searchers from Brazil, France, the United States and other countries are methodically scanning the surface and depths of the Atlantic for signs of the plane.
French-chartered ships are trolling a search area with a radius of 50 miles (80 kilometers), pulling U.S. Navy underwater listening devices attached to 19,700 feet (6,000 meters) of cable. A French submarine is also searching.
The black boxes send out an electronic tapping sound that can be heard up to 1.25 miles (2 kilometers) away.
Ten of 50 bodies recovered from the Air France flight that plunged into the Atlantic three weeks ago have been identified as Brazilians, medical examiners said.
Dental records, fingerprints and DNA samples were used to identify the bodies. Investigators are reviewing all remains, debris and baggage at a base set up in Recife, Brazil.

#No black box signals from F447
You May Also like: