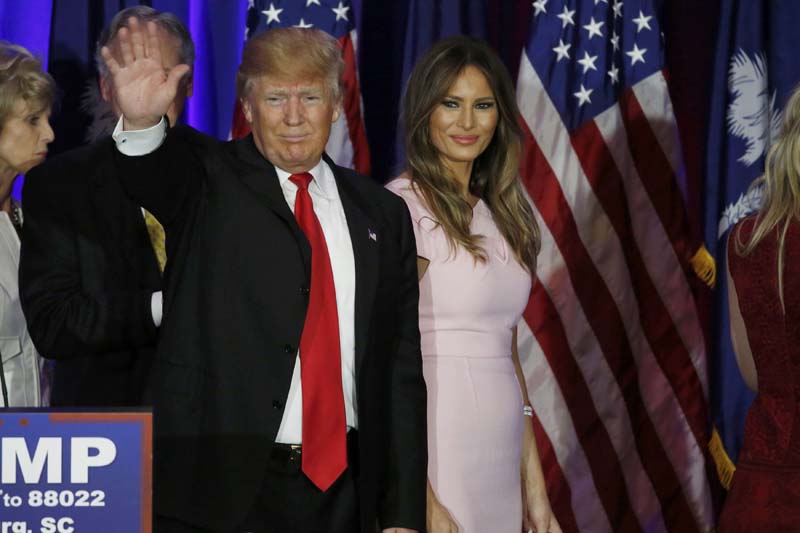 Republican US presidential candidate Donald Trump waves with his wife Melania (right) at his side as he departs after speaking at his 2016 South Carolina presidential primary night victory rally in Spartanburg, South Carolina on February 20, 2016. Photo: Reuters
New York, August 1 The New York Post today ran a front-page picture of potential first lady Melania Trump naked, prompting criticism on social media and charges of misogyny. It was the second day in a row that the Rupert Murdoch-owned tabloid ran a front page nude image of Republican presidential candidate Donald Trump’s wife from her years as a young model. “Menage a Trump,” ran the headline, touting the paper’s “exclusive photos.” The picture shows a nude Melania being hugged by another nude woman as she lies in bed. On Sunday, the Post ran a front-page picture of a nude Melania, with stars covering her breasts, under the title “The Ogle Office.” The Republican’s presidential campaign appeared to shrug off the pictures. Trump adviser Jason Miller told CNN on Sunday that there was “nothing to be embarrassed about with the pictures -- she’s a beautiful woman.” Both sets of photos were taken in 1995 when the 46-year-old Slovenian-born Melania was 25 and working as a model, before she met Trump. The pictures were published the following year in Max, a now-defunct French magazine. The New York Post endorsed Trump for president in mid-April, describing him at the time as “a potential superstar of vast promise, but making rookie mistakes.” The reaction to the pictures on Twitter was mixed. “Shame on you #NewYorkPost for slut-shaming Melania Trump. The US needs no more neanderthal input to this already disgraceful election,” read one tweet. “I am appalled and outraged” by the cover photo, read another tweet.
#Donald Trump #Melania Trump
You May Also like: