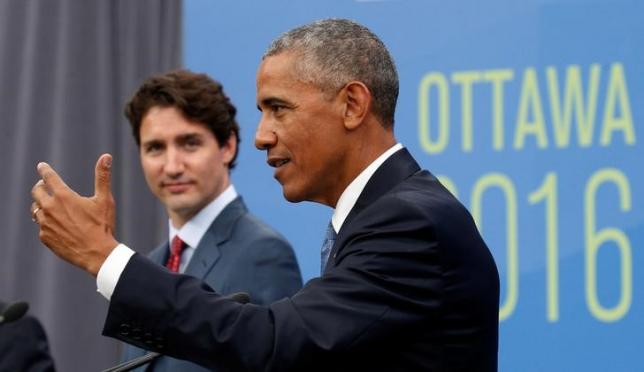 Canadian Prime Minister Justin Trudeau (L) listens as US President Barack Obama speaks at a news conference during the North American Leaders' Summit in Ottawa, Canada June 29, 2016. REUTERS
OTTAWA: US President Barack Obama said on Wednesday he expects the world economy will be steady in the short run after Britain's decision to leave the European Union but expressed concern about longer term global growth. Obama, appearing at a North American summit with the leaders of Canada and Mexico, said there have been reactions in markets, stock prices and currencies since last Thursday's so-called Brexit vote. Preparations by central banks, finance ministers and the US treasury secretary helped ensure the global economy will hold steady in the short term, he said at a news conference. "I think there are some genuine longer term concerns about global growth if in fact Brexit goes through and that freezes the possibilities of investment in Great Britain or in Europe as a whole," Obama said. "At a time when global growth rates were weak already, this doesn't help." The US president, who had openly sided with British Prime Minister David Cameron against Brexit, said the leaders of G20 nations, who will meet in China this year, will have to work to boost global demand and fortify the global economy. Obama said that, while the special relationship between Britain and the United States will endure, that country's absence from the EU would "make it harder for us to solve some of the other challenges that have to be solved." He said his main message to Cameron, German Chancellor Angela Merkel and other leaders involved in the Brexit would be: "Everybody should catch their breath, come up with a plan and a process that is orderly, that's transparent, that people understand and then proceed, understanding that both sides have a stake in getting this right. "And I think that will be a difficult, challenging process but it does not need to be a panicky process."
#United States #European Union #britain #Barack Obama
You May Also like: