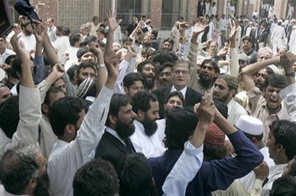 Supporters of Hafiz Mohammed Saeed, chief of an Islamic charity Jamaat-ud-Dawa, chant slogans to celebrate the Lahore High Court's decision to release the hard-line Islamist cleric, in Lahore, Pakistan on Tuesday, June 2, 2009. The Pakistani court on Tuesday ordered the release of Saeed, who was allegedly linked to the attacks in the Indian city of Mumbai, his lawyer said, setting the stage for a new round of tensions between the two countries. Source: AP Photo/K.M. Chaudary

LAHORE: A Pakistani court ordered the release Tuesday of a hard-line Islamist cleric allegedly linked to the attacks in Mumbai last year, his lawyer said, leading India to accuse Pakistan of not being serious about bringing militants to justice.
The Lahore High Court's decision to free Hafiz Mohammed Saeed from house arrest came as tensions are spiking in Pakistan's northwest along the Afghan border. Security forces early Tuesday rescued dozens of people kidnapped by militants, and the army is still battling Taliban fighters in the Swat Valley.
India has demanded that Pakistan vigorously pursue those behind the November siege of its commercial capital that killed 166 people and left nine of 10 gunmen dead. The two nuclear-armed nations have fought three wars in six decades.
Under tremendous pressure from the U.S. and other international powers to investigate domestic links to the attacks, Pakistan said it took several alleged suspects into custody in December.
They included Saeed, the head of a charity that the U.N. has called a front for Lashkar-e-Taiba, the banned militant outfit blamed in the attack. Pakistan's government also shut down or took control of many offices of the charity, known as Jamaat-ud-Dawa.
But Pakistan has a poor track record of prosecuting alleged militant leaders, and it has bickered with its giant South Asian neighbor over the proper amount of evidence needed to arrest, charge and convict the attack's suspected masterminds.
"We are unhappy that Pakistan does not show the degree of seriousness and commitment that it should to bring to justice perpetrators of the Mumbai terror attack," India's Home Minister Palaniappan Chidambaram told reporters in New Delhi after the ruling.
Saeed's lawyer, A.K. Dogar, emerged from the courthouse Tuesday and said that judges had decided that Saeed's house arrest "is against the law and constitution of the country." Supporters shouted "God is Great!" as he spoke.
A copy of the court order could not immediately be obtained. Attorney General Sardar Latif Khosa said the government would read the detailed judgment before deciding whether to appeal the decision.
Other suspected leaders of Lashkar-e-Taiba — including Zaki-ur-Rehman Lakhvi and Zarrar Shah, whom India claims planned the Mumbai attacks — remain in custody. They are facing trial at a court inside a high-security prison near the capital, Islamabad, according to three prison officials who requested anonymity because they were not authorized to speak to media.
The proceedings of the court are not open to the public, and is not clear what charges the men face or whether the trial has begun.
Pakistan has not publicly announced any indictment or charge against Saeed, and it is unclear what role he is suspected of playing in the Mumbai attack. However, Pakistani anti-terrorism laws allow suspects to be detained for up to a year as long as the government can convince courts to extend their detentions every 90 days.
Saeed helped establish Lashkar-e-Taiba two decades ago to fight Indian rule in the disputed Himalayan region of Kashmir. The group, believed to have had the support of Pakistani intelligence, was banned in 2002.
After that, Jamaat ud-Dawa emerged with Saeed as its leader, and it has been considered a highly effective aid organization, especially in its relief work.
Since the crackdown, it is believed to have taken another name — Falah-i-Insaniat — and its workers have been helping Pakistanis displaced by the Swat operation.
Saeed's spokesman Yahya Mujahid told The Associated Press that the court decision vindicated Saeed's claim that Jamaat-ud-Dawa is not linked to terrorism.
"We hope this order will be implemented," he said. "Our organization is working to serve the suffering humanity."
Earlier Tuesday, security forces rescued dozens of students, teachers and staff from a boys school who had been taken captive by militants in the North Waziristan tribal region, the army spokesman said. The rescue apparently ended a brief kidnapping saga that further rattled the country.
Maj. Gen. Athar Abbas said 80 people, 71 of them students, were found by forces when their convoy, escorted by militants, passed through a checkpoint headed toward South Waziristan tribal region bordering Afghanistan.
The region is a major al-Qaida and Taliban stronghold from which militants are thought to launch attacks inside Afghanistan as well.
"Everyone is safe and sound," Abbas said, adding that there was an exchange of fire.
Details about the kidnapping are murky, with reports on the number of victims ranging from dozens to more than 500.
Police official Meer Sardar said the abduction occurred about 20 miles (32 kilometers) from Razmak Cadet College. The convoy carrying students, teachers and staff was stopped by a large group of gunmen in their own vehicles.
Cadet colleges in Pakistan are usually run by retired military officers and educate teenagers.
The Waziristans lie roughly 150 to 200 miles (210 to 320 kilometers) from the Swat Valley. South Waziristan is the main base for Pakistani Taliban chief Baitullah Mehsud.
Recent clashes have fueled speculation the military may widen its Swat offensive to South Waziristan, though the army says troops in South Waziristan are merely reacting to attacks.
Journalists have limited access to the tribal belt and Swat, making it difficult to independently verify information from the Pakistani military or other sources.

#Alleged Mumbai-linked cleric freed in Pak
You May Also like: