ISLAMABAD: Tens of thousands of Pakistani opposition supporters rallied on Friday to demand the ouster of what they say is the illegitimate government of Prime Minister Imran Khan, warning of chaos if their demands were not met. 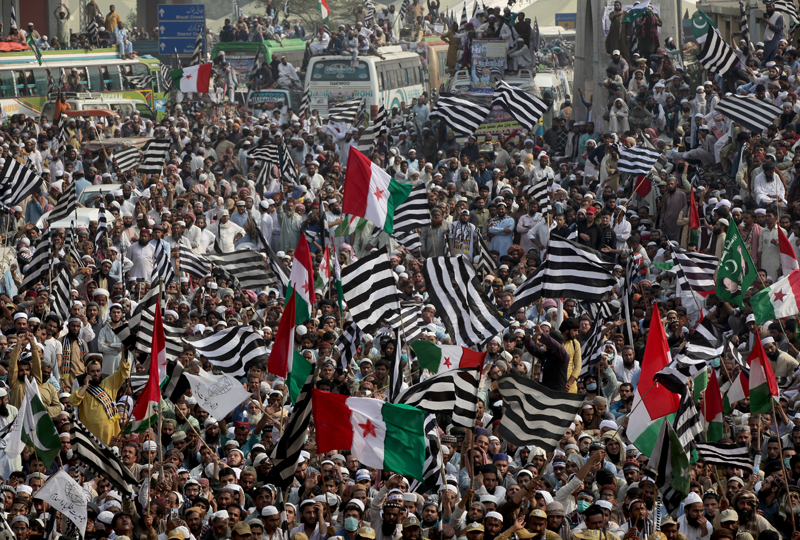 Supporters of religious and political party Jamiat Ulema-i-Islam-Fazal (JUI-F) wave flags as they listen to the speech of their leaders while heading towards Islamabad city, during what they call Azadi March (Freedom March) to protest the government of Prime Minister Imran Khan in Lahore, Pakistan October 30, 2019. Photo: Reuters
The protest, in the capital Islamabad, is the first concerted opposition challenge that cricket star-turned-politician Khan has faced since he won a general election last year promising to end corruption and create jobs for the poor. The leader of one of Pakistan's largest religious parties, Fazl-ur-Rehman, is spearheading the protest with the support of both main opposition parties. It comes as Khan's government is struggling with the economy. The opposition says the government is illegitimate and is being propped up by the military, which has ruled Pakistan for about half of its history and sets security and foreign policy. The military denies meddling in politics. Khan has dismissed the opposition calls to step down and the government has warned it will not tolerate chaos on the streets. "There is an undeclared law here," said protester Habib ur Rehman, 35, a supporter of Fazl-ur-Rehman's conservative Jamiat Ulema-i-Islam-Fazl party. The veteran politician can mobilise support in numerous religious schools and has warned of chaos across the country if the government does not step down. He was due to address the rally after Friday prayers. Security is tight in Islamabad with the government and diplomatic sector - just a few miles (kilometres) from the rally site - sealed off, roads blocked by barriers of shipping containers. Schools are closed, public transport suspended and internet services interrupted in some areas, a service provider said. The army chief, General Qamar Javed Bajwa, urged Khan to handle the protest peacefully and avoid violence by both sides, a military spokesman said. Khan won the election on promises of breaking Pakistan away from its legacy of corruption and on plans to pull 100 million people out of poverty. But an economy in crisis forced his government, like many of its predecessors, to turn to the International Monetary Fund. Pakistan got a $6 billion bailout in July. The government is trying to correct an unsustainable current account deficit and cut debt while trying to expand the tax base in the country of 208 million people, in which only 1% of people file returns. Inflation is squeezing household budgets and traders this week protested against new tax measures. Protester Rehman said people were struggling to make ends meet, and he blamed Khan. "My family voted for him thinking he's a new person and looked sincere," he said. "But he's failed us."
#Islamabad #Prime Minister Imran Khan #Pakistani protesters #Imran Khan's resignation demand
You May Also like: