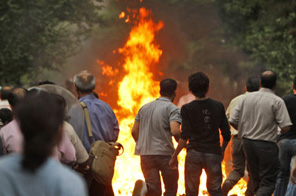 TEHRAN: Iran's electoral body, the Guardians Council, has completed partial recounting of ballot boxes in some cities and the result is unchanged from what was announced a day after the June 12 presidential poll, the Fars news agency said on Monday.

Fars said the recount is complete in Islamshahr and Robat-Karim in the province of Tehran, Karaz, located west of Tehran, Zarhan and Kerman in southern Iran, Babolsar in northern Iran, and Sarbisheh and Nahbandan in the east of the country.

Results from the recount in these cities are unchanged from what was officially declared two weeks ago, the news agency added, without saying who the winner was in these cities.

It said in Zarhan, Mahmoud Ahmadinejad had received one extra vote in the recounting, defeated candidates Mir Hossein Mousavi saw his tally recede by two votes, Mehdi Karroubi lost one vote, while that of Mohsen Rezai was unchanged.

Recounting in some cities in the West Azerbaijan province was also completed but the result was still unknown, the report said.

The Guardians Council is recounting 10 percent of the total ballot boxes after defeated candidates alleged that Ahmadinejad's declared victory in the presidential poll was due to "rigged" voting.

The electoral watchdog has said it would announce final results of the recount later on Monday.

#Iran results unchanged in 1st recount
You May Also like: