COLOMBO: Forced to flee their country a decade ago to escape allegedly state-sponsored killer squads, Sri Lankan journalists living in exile doubt they'll be able to return home soon or see justice served to their tormentors — whose alleged ringleader could come to power in this weekend's presidential election. Exiled journalists and media rights groups are expressing disappointment over the current government's failure in punishing those responsible for crimes committed against media members during President Mahinda Rajapaksa's tenure from 2005 to 2015. 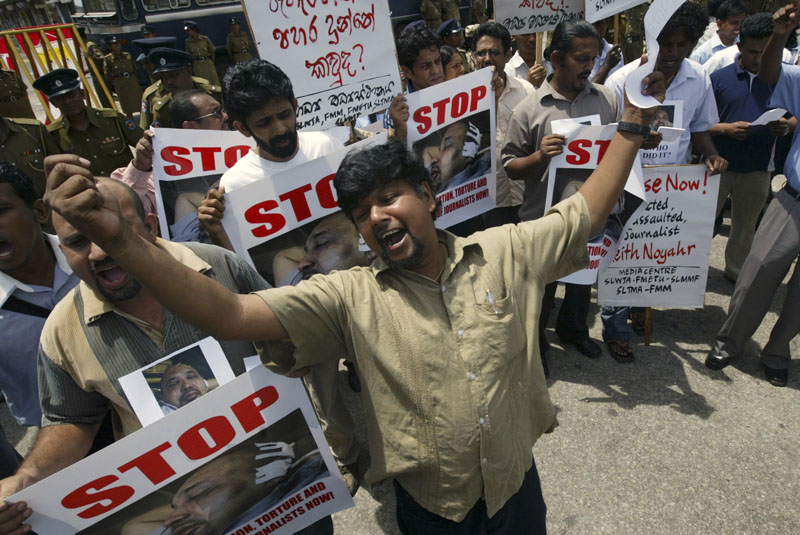 Sri Lankan journalists shout slogans during a protest demanding the government investigation into abduction and assault of fellow journalist Keith Noyahr in Colombo, Sri Lanka, May 23, 2008. Photo: AP/File
And with Rajapaksa's younger brother Gotabaya Rajapaksa — the former defence chief suspected of being behind the attacks — favoured to win Saturday's election, they do not believe the situation will change anytime soon. The current government led by President Maithripala Sirisena came to power in 2015 and promised to end impunity on crimes against journalists and media organisations. But more than four years later, police investigations still have not led to any convictions on media attacks. "We are not satisfied with the measures taken by this government in probing the attacks on media," said Duminda Sampath, president of the Sri Lanka Working Journalists Association, the largest media organisation in the country, adding that "none of the culprits accused of attacks on media has so far been exposed or punished." During Mahinda Rajapaksa's time as president, several journalists were assassinated by unidentified killers, while others were abducted in mysterious white vans and tortured before being either killed or released. The abductions and killings took place during the final years of Sri Lanka's long civil war, which ended in 2009. While there are no proper records to show how many were abducted or killed, Sampath said around 60 journalists fled the country during this period out of fear for their lives. The abductions of journalists and critics of the government in the white vans were a symbol of oppression during the presidency of Mahinda Rajapaksa, who is credited with ending the quarter-century-long civil war. The war ended with the military crushing the Tamil Tiger rebels, who were fighting for a separate homeland for the Indian Ocean island nation's ethnic Tamil majority. Poddala Jayantha is one of the few journalists who survived after being abducted by a van squad. He was taken on June 1, 2009, just after the war's end, and was brutally tortured — his legs crushed, fingers were broken and body burned — before being released. Jayantha was hospitalised for 29 days. Even after being discharged, he could barely walk for six months. At the time of his abduction, he was president of the Working Journalists Association, speaking against the suppression of the media and organising protests at a time when doing so was considered dangerous. Six months after his attack, he fled the country with his wife and daughter, as threats to his life increased. He now lives in New York. Speaking with The Associated Press by a Facebook chat, Jayantha expressed disappointment over the authorities' failure to bring the people responsible for his attack to justice. "So far no significant progress has been made on my case. Police have only recorded statements from some people," he said. Only a few high-profile cases are being heard in the courts, albeit at a slow pace, while investigations haven't even begun on dozens of others. Gotabaya Rajapaksa, considered the leading candidate in Saturday's election, served as the powerful defence secretary during the last few years of the civil war under his brother and is considered a hero among Sri Lanka's ethnic majority Sinhalese for his role in ending the war. The bomb attacks on Sri Lankan churches and hotels last Easter Sunday that killed 269 people have only boosted his popularity, with many looking for a leader who will prioritise security. But in addition to allegedly being behind the attacks on journalists and government critics, Gotabaya Rajapaksa also has been accused of condoning rape, extrajudicial executions and abductions of civilians during his time as defence chief. Rajapaksa's office did not respond to requests for comment from him, but he has repeatedly denied the allegations. His spokesman Sarath Amunugama said recently that "all sorts of allegations can be made. But there must be proof and judicial processes." Sampath lamented comments made by Rajapaksa at his first election rally when he said he will release all military personnel under detention if he comes to power. Dozens of soldiers have been arrested over some of the attacks on journalists, and a few are still being detained. "Releasing them without a trial would lead to a collapse of the rule of law and the situation will be worsened," Sampath said. Steven Butler, Asia program coordinator for the Committee to Protect Journalists, said his group has heard from journalists who are frightened by a potential Rajapaksa presidency. "Just the prospect of his election has already had an impact on press freedom," he said. Jayantha, the journalist who survived an abduction, fears that investigations would come to a halt if Rajapaksa comes to power. "All the investigations on attacks on journalists will be doomed," he said. Jayantha was hoping to return to Sri Lanka after his daughter's college graduation in New York in June and restart his journalism career in his home country. But if Rajapaksa comes to power, he said, "I don't think I would be able to come to Sri Lanka again." "My family will not allow me to come here. Even if I come, I don't think I could perform my role as a journalist, especially in a society where my attackers are still at large," he said. Athula Vithanage, a Sri Lankan journalist who has lived in exile in Paris since 2009, also criticised the government's failure. He said by phone that he had been planning to return to Sri Lanka after the change of government in 2015 but changed his mind because "nothing significant happened" to improve the safety of journalists or to investigate attacks on them. Vithanage, who along with other exiled journalists runs a website that gives details on 44 media workers who were killed from 2004 to 2009, said if Rajapaksa becomes president, none of the exiled journalists will be able to return home. "Whatever hope that we have incoming back will be shattered if he comes to power," he said.
#President Maithripala Sirisena #Sri Lankan journalists #President Mahinda Rajapaksa #state-sponsored killer squads
You May Also like: