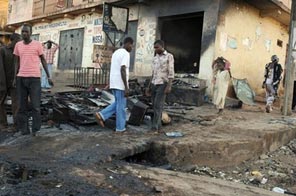 People walk past a shop that was burnt during unrest in Jos, Nigeria, in 2008. Source: AFP

KANO: Nigerian security forces have cordoned off a district of the city of Jos where clashes between Christians and Muslims left 10 dead.
Police and military were deployed and a 12 hour dusk-to-dawn curfew imposed in the Nassarawa Gwom district after Sunday's clashes over the building of a mosque in which at least six people were seriously hurt by gun and machete attacks.

Security forces searched cars and people on the street for weapons, residents said.

"Security personnel have succeeded in quelling the unrest and restoring calm in the affected area of the city," Plateau State police spokesman Mohammed Lerema told AFP.

"We have cordoned the Nassarawa Gwom district as a strategy to prevent the violence from spilling over to other parts of the city," he said.

"I am happy to announce that peace has returned to the city following the restoration of law and in Nassarawa Gwom by security agents," he said.

He said the curfew would remain in force "to ensure that no security breach happens. The government calls on the people to go about their normal business without fear."

The fighting erupted when Christian youths protested the building of a mosque in the Christian-dominated Nassarawa Gwom district. Houses and vehicles were set alight.

The curfew was imposed and University of Jos authorities told students to go home.

Nigeria, Africa's most populous country with some 150 million people, is evenly divided between the mainly Muslim north and mainly Christian south.

Jos and other central and northern areas have been plagued by religious violence.

In November 2008 hundreds of people were killed in Jos in two days of fighting triggered by a rumour that the mainly Muslim All Nigerian Peoples Party had lost a local election to the Christian dominated Peoples Democratic Party.

State officials put the death toll at about 200 but other sources gave a toll twice that figure.

Last month at least 70 people were killed in clashes between security forces and members of a radical Islamist sect in the northern Bauchi State.

Another sect, Boko Haram, which means "Western education is a sin", staged an insurrection in July in nearby Borno State when at least 800 people were killed as security forces crushed the unrest.