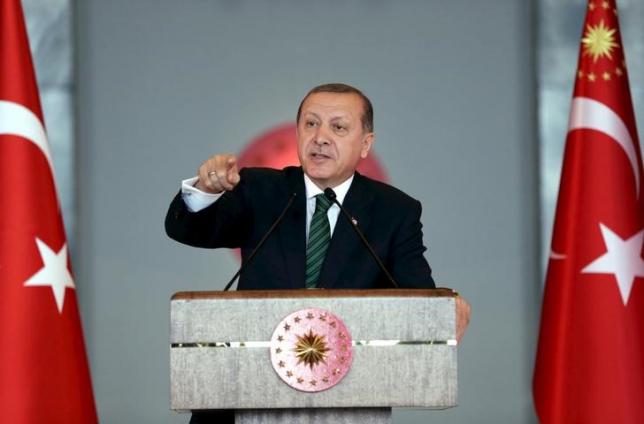 Turkish President Tayyip Erdogan makes a speech during a meeting in Ankara, Turkey February 17, 2016, in this handout photo provided by the Presidential Palace. REUTERS
ISTANBUL: Turkey's presidency said US President Barack Obama had shared his concerns over the Syrian conflict and promised his support on Friday, hours after a tense exchange between the two NATO allies over the role of Kurdish militants. In a phone conversation that lasted one hour and 20 minutes, Ankara said Obama had told his counterpart President Tayyip Erdogan that Turkey had a right to self-defence, and expressed worries over advances by Syrian Kurdish militias near Turkey's border. Obama stressed to Erdogan that Syrian Kurdish YPG forces should not seek to exploit recent gains by the Syrian government to seize additional territory, the White House said in a statement. He also called for Turkey to "show reciprocal restraint" by stopping artillery strikes in the area, the statement said. Earlier on Friday, Erdogan had said US-supplied weapons had been used against civilians by a Syrian Kurdish militia group that Ankara blames for the deadly suicide bombing this week. The State Department, which sees the Syrian Kurdish YPG fighters as useful allies against Islamic State, said the United States had "not provided any weapons of any kind" to the group. The issue risks driving a wedge between the NATO allies at a critical point in Syria's civil war, as the United States pursues intensive talks with Syria's ally Russia to bring about a "cessation of hostilities." Turkey has blamed the YPG for the suicide car bomb attack on Wednesday that killed 28 people, most of them soldiers. But a Turkey-based Kurdish splinter group has claimed responsibility for the bombing and threatened more attacks. Obama expressed his condolences to Erdogan over the bombing in the Turkish capital, the White House said. Before the call with Obama, Erdogan said he was saddened by the West's refusal to call the Syrian Kurdish militia terrorists, and would explain to the US president how weapons provided by the United States had aided them. "I will tell him, 'Look at how and where those weapons you provided were fired'," Erdogan told reporters in Istanbul. "Months ago in my meeting with him I told him the U.S. was supplying weapons. Three plane loads arrived, half of them ended up in the hands of Daesh (Islamic State), and half of them in the hands of the PYD," he said. "Against whom were these weapons used? They were used against civilians there and caused their deaths." The White House statement did not say whether Erdogan brought up the subject of US weapons with Obama. AIR DROP Erdogan appeared to be referring to a US air drop of 28 bundles of military supplies in late 2014 meant for Iraqi Kurdish fighters near the Syrian city of Kobani. Pentagon officials said at the time one had fallen into the hands of Islamic State. The Pentagon later said it had targeted the missing bundle in an air strike and destroyed it. The United States has said it does not consider the YPG a terrorist group. A spokesman for the State Department said on Thursday that Washington was not in a position to confirm or deny Turkey's charge that the YPG was behind the Ankara bombing. The spokesman also called on Turkey to stop its recent shelling of the YPG. The YPG's political arm has denied the group was behind the Ankara attack and said Turkey was using it to justify an escalation in fighting in northern Syria. The Turkish government has said the Ankara attack, in which a car laden with explosives was detonated next to military buses as they waited at traffic lights, was carried out by a YPG member from northern Syria working with Kurdish militants inside Turkey. But the Kurdistan Freedom Hawks (TAK), a group that once had links to the Kurdistan Workers Party (PKK), claimed responsibility for the bombing in a statement on its website. It said the bomber was a 26-year-old Turkish national. The claim of responsibility by TAK is unlikely to make a difference to Turkey's demand that Washington stop its support of the Syrian Kurdish fighters. Turkish Foreign Minister Mevlut Cavusoglu earlier accused the United States of making conflicting statements about the Syrian Kurdish militia. He said US Secretary of State John Kerry had told him the Kurdish insurgents could not be trusted, in what Cavusoglu said was a departure from Washington's official position. "My friend Kerry said the YPG cannot be trusted," Cavusoglu said at a news conference during a visit to Tbilisi. "When you look at some statements coming from America, conflicting and confused statements are still coming.... We were glad to hear from John Kerry yesterday that his views on the YPG have partly changed." Within hours of the Ankara attack, Turkish warplanes bombed bases in northern Iraq of the PKK, which has waged a three-decade insurgency against Turkey and which Prime Minister Ahmet Davutoglu accused of collaborating in the car bombing. Violence between Turkish security forces and the PKK has been at its worst since the 1990s after a 2-1/2-year ceasefire collapsed last July. Two soldiers and a police officer were killed on Friday in a PKK attack in the Sur district of the southeastern city of Diyarbakir, parts of which have been under round-the-clock curfew since December, the armed forces said. Three other soldiers were killed as a building collapsed in the same district.
#Turkey #Syria #President Barack Obama
You May Also like: