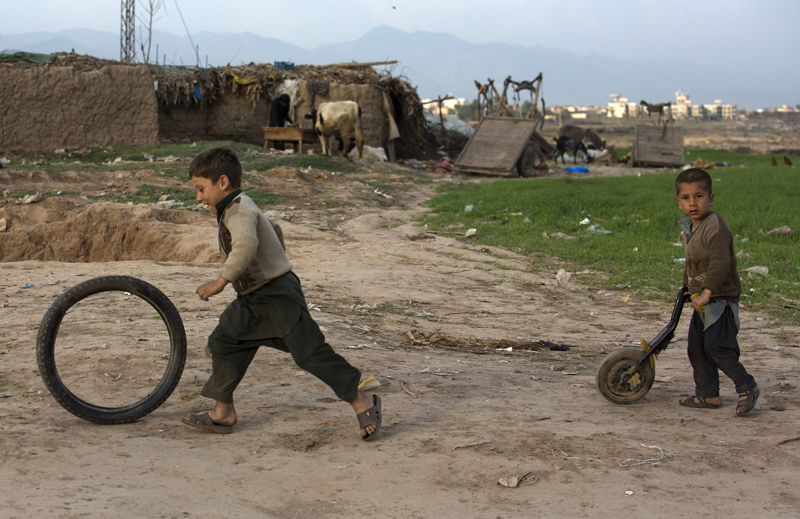 Afghan children play in a refugee camp situated in the suburbs of Islamabad, Pakistan, Monday, Feb. 20, 2017. Photo: AP
PARIS: Child soldiers, underage sex slaves, orphaned adolescent refugees France's president and UNICEF are urging the international community to do more to protect the more than 200 million children of today's conflict zones. "The situation is as urgent as ever," French President Francois Hollande pleaded as he opened a conference in Paris on Tuesday with representatives from 80 countries, decrying "the nightmare that killed these children's innocence." Organizers want coordinated efforts to liberate and re-integrate thousands of child soldiers from Sudan to Somalia, and thousands of girls forced into wedlock by militants from Nigeria to Afghanistan. "Those who harm these children are harming what is most sacred to humankind," Hollande said. "Killing and brutalizing children is negating civilization." The conference is also pushing for tougher prosecution of abusers, and protection for hospitals and schools targeted in war zones, such as in Syrian government airstrikes on Aleppo recently. While 105 countries have signed onto promises made 10 years ago to protect conflict children, problems persist and the conference is aiming at enlisting more governments in the effort. "Children do not belong on the battlefield. They belong in school. They belong in safe places where they are loved and protected from the battles that they had no hand in creating," UN Children's Fund director Anthony Lake told the conference. Hollande also called on Britain to take in more unaccompanied child refugees currently in France. "I call on the United Kingdom to shoulder its responsibilities concerning adolescents today in France currently who have families across the Channel. We have made efforts to shelter and welcome them. They want to go to the UK. We have agreements with our friend and neighbor country and these agreements by our friend and neighbor must be fully respected." Hundreds of unaccompanied teens and younger children were among thousands of migrants who converged on a filthy camp in Calais last year before it was dismantled in October. The children were taken to migrant centers around France pending British decisions on whether to accept them.
#Syria #Iraq #UNICEF #France #conflict zones #Francois Hollande #sex slaves #Child soldiers #Children for war
You May Also like: